The House of the Seven Gables

"HALFWAY down a by-street of one of our New England towns stands a rusty wooden house, with seven acutely peaked gables, facing towards various points of the compass, and a huge, clustered chimney in the midst." -- Nathaniel Hawthorne, "The House of the Seven Gables." 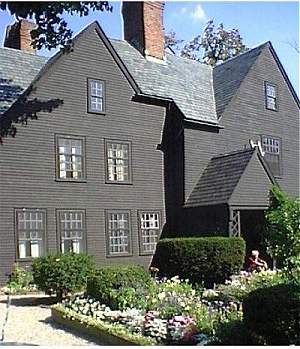 Built in 1668, the house made famous by Nathaniel Hawthorne is the oldest surviving 17th century wooden mansion in New England. The building and grounds of the Seven Gables constitute their own national historic district on The National Register of Historic Places.

The house, and the novel of the same name, provide a study of contrasts. Portrayed as looming, dark and mysterious in the novel, the house nonetheless has light, even romantic, features. Its period gardens are charming, and the granite seawall running along the property provides a perfect perch to look over a calm, blue ocean. An upstairs bedroom is light and airy with a wall of windows looking over the sea. The novel is described as a romance by the author himself, yet it opens with a foreboding description of a property acquired by murderous deception and a resulting curse that plagues generations.

Costumed interpreters will meet you at the door to take you on a tour, even revealing the secret stairwell that plays a part in the novel. Warning: The trip up the stairwell is not for the claustrophobic. Constructed in 1668, the House of Seven Gables typifies a tradition of wood building brought to New England by the Puritan colonists. The building is characterized by steeply pitched gable roofs, massive chimneys, and asymmetry.

For the record, a gable is the triangle formed by a sloping roof. A building may be front-gabled or side-gabled -- or both.

Now part of a museum, the Seven Gables houses more than 2,000 artifacts and objects, more than 40 framed works, 500 photographs and glass plate negatives, and more than 650 volumes in its research and rare book library. The home where Hawthorne was born was moved to The Gables and now lies just feet away from the mansion made famous by the author.

As with so much of Salem, witchcraft is woven into both the life of the author and the fiction of the Seven Gables. Nathaniel Hawthorne was born on July 4, 1804 in Salem, Massachusetts, the descendent of a long line of Puritan ancestors, including a presiding magistrate in the Salem witch trials. In the novel, the Seven Gables is built by a greedy Colonel Pyncheon on land ill-gotten from a villager. This villager, Matthew Maule, has the local reputation of being a wizard. To acquire the land for the Seven Gables, Pyncheon has the unfortunate Matthew Maule tried and executed for witchcraft. He then constructs the imposing mansion, setting the stage for his own untimely death and a curse that plagues his descendants.

The blend of mystery, romance and awe remain to this day in the real Seven Gables. Various special events throughout the year promote history and mystery of the house, including tours offered in October in which visitors explore the mansions shadowy rooms and encounter characters from the novel, including the bewitched Alice Pyncheon and the ghost of Matthew Maule.