A six-year-old plumber? How my daughter replaced an outdoor spigot

After several decades of use, the galvanized steel pipe that led to our outdoor faucet was so corroded that it was like rubbing Vasoline between your toes to repel mosquitoes: Useless. The spigot had also seen better days and it was time to replace it.

A few years ago, I would have hired a plumber to do this job. This time, I got my six year old daughter to do it. Yes, she's in kindergarten.

Now that I discovered flexible PEX tubing and SharkBite pipe fittings I find it so easy that it's actually fun to do plumbing. In fact, it's easy enough that when my six year old daughter asked if she could help replace the outdoor faucet I embraced the chance to entertain her while accomplishing what was once considered a tedious house chore. With new push-fittings there are no torches, glues or solders required. It's like putting together a kid's toy.

With my Kindergarten-Cop(per) assistant by my side, here's how I replaced my faucet in under an hour and a half (including an extra trip up to the hardware store): 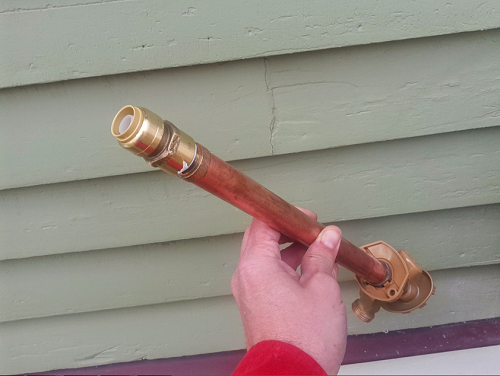 I first shut off the water supply, then removed the existing spigot and steel pipe. This was the hardest part of the project. Then I purchased a high-quality frost-free outdoor spigot and attached a matching SharkBite push-fit female connector. 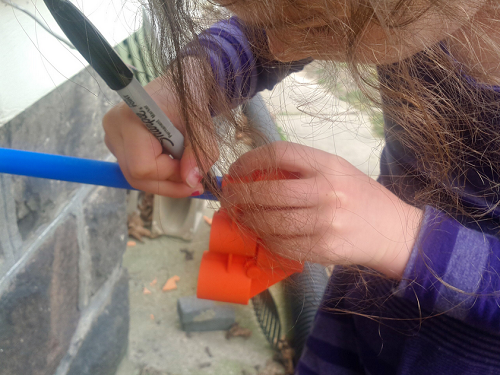 I let my daughter slide the flexible PEX tubing from the basement through the existing spigot hole. I used blue pipe since this is a cold water line (red PEX is used for hot water lines). Then using the SharkBite de-burr and gauge tool, my little kindergartner marked the proper depth on the PEX using a permanent marker. She twisted the tool a few times to make sure the end of the PEX was clean and burr-free. 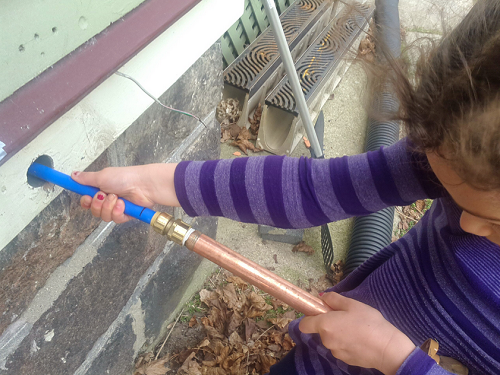 Next, she simply pushed the SharkBite connector onto the PEX tube and made sure it went all the way up to the line she made with the marker. This ensured that the pipe was completely secure and leak-free. "Easy peasy lemon squeezy", she said. 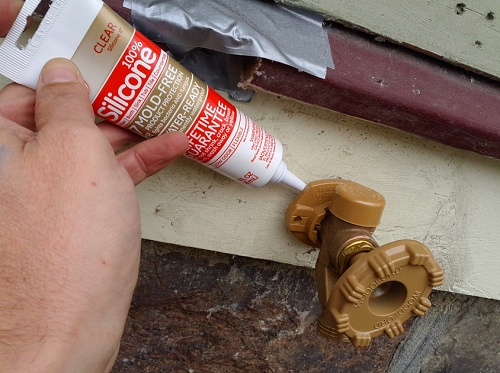 Once the PEX tubing was securely attached to the spigot, the Petite Plumber slid the frost-free pipe into the hole until the spigot was flush against the wall. Next, I squeezed a healthy amount of clear silicone caulk behind the spigot mount and secured it tightly with stainless steel wood screws. 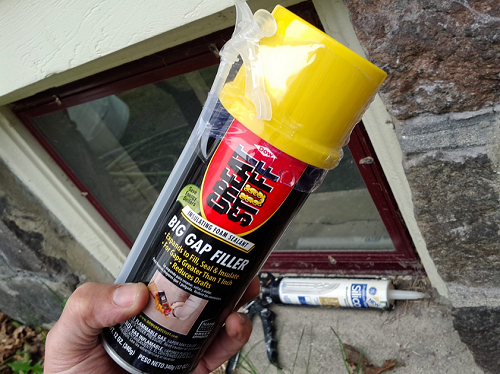 I made sure to apply spray foam insulation from inside the basement into the hole around the spigot pipe. This keeps air from leaking out of the house so the heating or a/c doesn't need to work overtime, the house stays cozy and insects are kept outside where they belong. (IMPORTANT: This stuff is messy and safety precautions should be taken. This part should be done by an adult and kept away from children.) 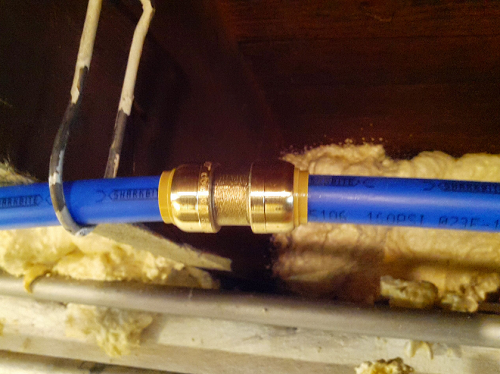 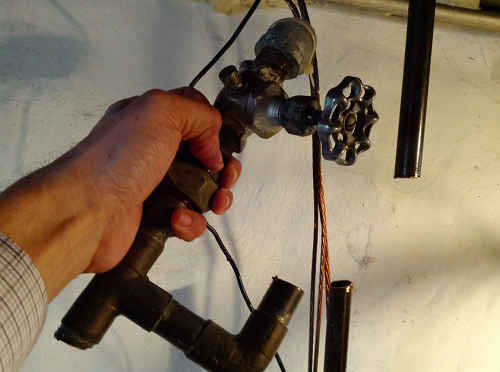 In the basement, I used a SharkBite coupler to connect my two ten foot lengths of PEX pipe. Finally, I connected the end of the PEX to the supply line and replaced the original shut off valve with a new SharkBite shut-off ball valve. One of the joys of the SharkBite push-fittings is that it connects to copper in the same way that it connects with PEX. So, where hard pipe is needed for rigidity the same easy system can be used.

The entire job cost under $100, including the shut off ball valve, frost-free spigot, caulk, foam, 20' of PEX tubing, and a few push-fit connectors to retrofit some existing pipe in the basement.

Using a pipe wrench and a hack saw, it took about 30 minutes to remove the old pipe. To replace the spigot took about a 50 minutes, including a 20 minute trip to the hardware store to get a part that I forgot.

TIME DADDY SPENT WITH THE PRINCESS OF PLUMBING = Priceless.