Old houses aren’t for sissies. You’ve heard that before, right?

Did I mention that my grandma used to call me Sissy Marue?

I’m buying the house that was built in 1905 and belonged to my grandma. Correction: I was buying the house. Now I’m not. Backing out of an old house transaction or abandoning full-scale renovations is pretty common. Sometimes homeowners who are renovating can get overwhelmed. Sometime stuff happens. Change happens.

What happened in my case? The variables changed. What started off as a slam dunk sale of a house that’s been in the family for 60 years resulted in me renting a new place 100+ miles away because of a whole host of delays. But finally, enough people dragged feet until the two set asides (yes, two) couldn’t be completed in time for me to take advantage of that first time home buyer’s tax rebate (FTHBTR) that I would have still been able to claim because I had purchase agreement prior to March 30.

The reason I wanted to buy instead of rent was it made good financial sense, particularly because I could use the FTHBTR to fund some much-need renovations and the energy efficiency rebate, which would pay for around one-third of a much-needed new roof.  Financing wasn’t an issue. I wanted to buy this particular house because of sentimental value. I had a vision of exactly what I would do to the backyard, and how the bathroom would look once it was fixed up. Letting go of that is hard to do.  It’s not for sissies, either. 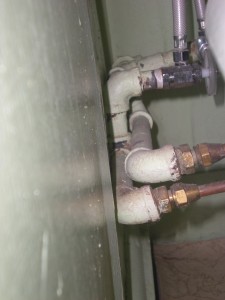 The wall behind the plumbing should be flat. Right now, that plumbing is keeping that portion of the wall in place.

But it wasn’t just the loss of those rebates. It was also the change in both the scope and cost of renovations–scope creep.  The renovation projects had been well-scoped, but there’s no way I could have anticipated that the house’s only bathroom’s walls would bow. The verdict? It’s possible no retaining wall was used and the condensation from the bathroom may have rotted the walls. The bathroom was formerly a root cellar and not an original part of the adobe structure; it has no ventilation other than a window, no heat, and has concrete floor. Course of action? Poke a hole in the wall to make sure, but be ready to tear down and rebuild. The entire bathroom. In a week it might be winter in central Nevada.

If you’ve read any of the other articles in this series for Old House Newbies, you’ve read about the need for self-assessments. You’ll have also read that the structural stuff–like collapsing walls–needs to be at the top of your renovation project list. The bathroom was a game-changing variable. 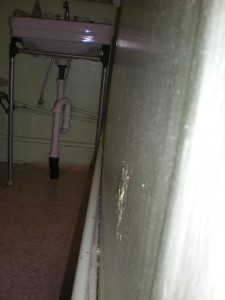 North wall of bathroom. The plumbing on the wall is straight. But the wall?

Backing out of a sale or giving up on an old house you’re renovating or even giving up on restoring your house’s original windows and buying replacement windows is a personal decision that requires you to know your emotional and financial limitations and weigh both against your desires. A demo and rebuild is outside my comfort zone, skill set, and budget. I also had to be really honest with myself. If the house hadn’t belonged to my family, I would have backed out of the sale because of the title issues and found another property. Despite the disappointment, it’s the right decision. I’m hopeful that the right old house is out there for me (and someone has already fixed the bathroom).

Read the other articles in this series: