Old House Moving: It's a Part of our Heritage

I’ve mentioned before that I’ve spent a large part of my life working in the residential and commercial construction fields, and I know firsthand how difficult it can be to build a large home or building. Not only is there a lot of hard labor involved, but depending on the size of the project, the logistics and scheduling can be extremely time consuming. That’s one of the reasons I’m often awestruck when I see a large old house or building that was built during the 1700s or 1800s without the benefit of modern tools and machinery. It amazes me what our ancestors were able to accomplish without power tools, forklifts, or cranes and in many cases the workmanship is far beyond anything you might see in most modern homes.

The same can be said about house moving. Modern house moving normally involves specialized and highly experienced contractors using large hydraulic jacks, heavy machinery, and large trailers to accomplish the difficult feat and even then there can be accidents with the old houses. House moving saves a lot of our heritage these days such as the 110-year-old house that was recently moved in North Dakota. The home was originally constructed by the current owner’s grandfather and had already survived one move in its past. Now it has been moved 85 miles and will spend the rest of its days as part of a historical exhibit.

Our ancestors realized the importance of saving historical structures, and that was a reason why they chose to move some old houses, but financial reasons were often just as important if not more so. Due to the high cost of labor and materials during the 1800s, it could be less expensive to move a house than it was to start over. According to an article in Concord Magazine, homeowners in 19th century Massachusetts often moved their homes rather than rebuild–and it was almost considered a winter pastime. 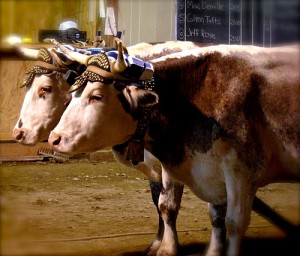 The move could consist of taking the home apart, marking each piece, and putting it back together at the new site or breaking the home into several large sections for transport. They even devised methods for moving houses intact for short distances without cracking the plaster on interior walls! House moving was usually scheduled for the winter when frozen ground and snow made it a little easier for the oxen pulling the load. In some cases even the individual stones in the foundation were marked for location and moved to the new site to be set in place. Whether they were saved for historical reasons or to save a few dollars, it’s pretty amazing what our ancestors were able to accomplish with the tools of the day. The oxen probably deserve some of the credit, too.