When I bought my first “old house” on the outskirts of Nashville, I wasn’t sure what to do with it. A complete newbie with any kind of restoration or renovation, I knew that my 1901 gem deserved to bask in its old glory, but there was so much to be done that a starting point seemed impossible. It wasn’t long before inspiration began to wane, and I thought about chucking the whole idea for a nice modern build.

Luckily for my old house, Nashville has a ton of historic homes that make for the perfect inspiration. If those houses could be brought back from the brink and restored to their original beauty, then surely my good-condition Victorian could see the same treatment.

In my search for inspiration, one of the first places I visited was Carnton Plantation. Built in 1826 by then-Nashville mayor Randal McGavock, the grand home stood front and center during one of the bloodiest battles of the Civil War. The five hours of bloodshed on November 30, 1864 resulted in 9,500 soldiers killed, wounded, captured or missing. The McGavock homestead served as a field hospital, where doctors treated hundreds in the days following the battle.

That battle changed the course of the grand home forever. Within months the McGavock family had dedicated two acres of their farmland to a cemetery for those who had died during the battle. The McGavock Confederate Cemetery is currently the largest privately owned military cemetery in the nation.

But what about the house? It stayed in the McGavock family until it was sold in 1911. In 1973, it was listed on the National Register of Historic Places, and in 1977 it was donated to the Carnton Plantation in the hopes of saving it. Restoration began, but the interesting thing about the house is what was not restored. There are musket holes in the walls, both inside and out. The cemetery was left intact with all the original markers. Most striking of all are the floorboards. The original wide boards were saturated with the blood of soldiers the doctors fought to save in the days after the battle. Those floorboards were preserved just as they were, blood stains and all. It serves as a stark reminder of the history within those elegant walls. 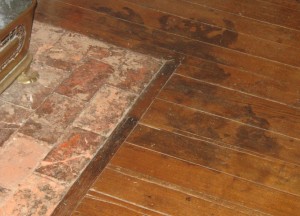 After my visit to Carnton Plantation, I saw my old house in a new light. The restoration is always a work in progress, but some things will always remain. The scuffed and stained original hardwood floors will never be replaced. The odd-shaped door that leads to nowhere will not be removed. The hand-etched bricks in the porch–created by the hands that built the house over a century ago–are good enough reason to avoid the more extensive renovation I was considering when I first bought the place.