When it comes to historical accuracy, there is no doubt that vinyl siding doesn’t make the grade. But what about siding that is carefully manufactured to look like traditional clapboard?

When it was time to do some exterior renovation on my 1901 Victorian, there was a significant price difference in choice. Should I have the almost three stories of clapboard repainted every five years or so at a hefty price? Or should I spend a bit more money for vinyl siding, then not worry about exterior work for the next few decades?

Then a contractor pointed out that some manufacturers now made siding that really did look like the real thing. Though I wanted desperately to preserve the house the way it was originally built, I had to take the budget into consideration–and as any old house lover knows, the older your house is, the faster the budget can be overwhelmed. Before I took the leap into any decision, I had to do the research. 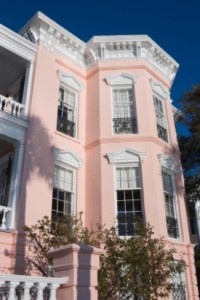 Both sides of the vinyl debate

Here’s what I found: Many historical preservation societies are dead-set against vinyl siding. In some historic districts, homeowners have filed lawsuits against their governing commissions in order to get an exception and be allowed vinyl siding. They have a strong argument: vinyl siding is much cheaper and requires less maintenance than traditional materials, and that comes in very handy when there is so much other restoration work to be done on the house. But the historic commissions have an equally valid argument: even the best vinyl siding can often make a home look out of place, and in a historic district, that can bring down property values for every house on the block.

However, one of the biggest problems that seems to be hiding behind the vinyl siding debate is what is actually hiding behind the siding. Historic houses are notorious for having condensation problems. Many historic homes were built before air conditioning came into the picture; back in those golden days, opening a window and using a fan was the best way to stay cool. But with modern advances, most of those historic houses are closed up tight, and that gives the water vapor nowhere to go.

With clapboard, problems with moisture can be quickly spotted. There might be damp spots on the walls that don’t go away, signs of rot on the bottom clapboard panels, and discolorations that can only be caused by mold and mildew. Catching these signs allows for early maintenance, repairs and replacement of the affected clapboard.

Vinyl siding, on the other hand, covers up the problem. The impermeable nature of the material means that water can’t get through, so instead, it collects behind the siding and runs down, leading to rot that you can’t see. This can be avoided by fixing all moisture problems at the start, before the siding is installed; however, how can you spot problems that crop up five years or so later?

In the end, I chose to keep my clapboard. Moisture problems three years in made me very happy with my decision, as the problem was spotted immediately and fixed within the week. My neighbor chose to go with vinyl siding. It’s almost time to paint my clapboard again, but his house looks just as good as it did the day the vinyl went up, and he hasn’t reported any problems at all with moisture. In twenty years or so, we will find out which of us made the wiser choice.