By: JoVon Sotak , Contributing Writer
In: In The News
3
Comments

The National Historic Preservation Act was enacted in 1966 to bring preservation efforts front and center. This is relatively new legislation; your house is probably at least two or three times as old. One thing that the NHPA did was establish historic preservation offices in each state. Some states already had historical societies focuses on historic preservation. One such state is Washington.

If you live in the Eastern U.S., it can be easy to forget just how new a lot of Western old houses really are. Washington didn’t enter the union until 1889. It was ol’ Lewis and Clark who explored the area in 1805-06, which was 185 years after the Mayflower landed at Plymouth Rock.  With that in mind, it’s pretty impressive and far-sighted that the Washington State Historical Society was founded in 1907 to preserve the state’s heritage. 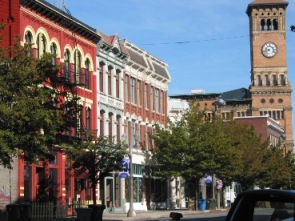 The revitalization of downtown Tacoma, Washington, was a key project of the Washington State Historical Society. Photo of Pacific Ave. c/o City of Tacoma

In recent weeks, however, Washington and its preservation efforts received bad news.  Governor Chris Gregoire’s proposed budget slashes funding for the state historical society and eliminates the state Department of Archaeology and Historic Preservation. Instead, the Department of Natural Resources would absorb some historic preservation duties, such as the required step of adding a property to the state heritage list so that it can qualify for the National Historic Registry. One new “Main Street program” that aims to revive commercial districts in cities and small towns throughout Washington would also be managed by the Department of Natural Resources.

Washington isn’t the only state whose old houses and historic properties are being impacted by the economy.

In Missouri, a commission appointed by the governor presented a plan that they claimed could save $220 million annual by “reducing, revamping or eliminating t 7ax credits that no longer are useful or that do note produce much benefit,” according to the Associated Press. Among the programs on the chopping block? Tax breaks for historic preservation. The cap in Missouri is currently $140 million for historic preservation tax credits. The new plan would drop that cap to $75 million.

In recent months, several of us at OldHouseWeb.com have been writing about how the slowly recovering economy is affecting old house and historic preservation. Early this week, Conrad wrote about Honolulu’s old house owners losing their tax breaks (31 states currently offer state tax breaks for old/historic homes). Local tax districts, such as in Austin, Texas, are reconsidering the property tax breaks it’s been giving old house owners because of budget short-falls. As money becomes tighter and people become increasing more desperate to buy and sell properties, more historic districts’ preservation efforts are also coming under fire.

As states continue to cut costs, some programs will be both cut and lost. Is your state next?