Hi I am a young (23) ambitious male, who wants very badly to take over and restore my grandmothers house. No one has lived in it for the past 12-15 years and the previous 5 years before that my great-grandparents were not very good at the up-keep. My Great-Great Grandfather was young when they built the house. I am guessing in the 1830-1860 range though I cannot be sure. I know my Great Grandfather was born in the house in 1920 and he died when he was 102. The foundation and structure for the most part is very sound. The original slate roof is in desperate need of repair and has been leaking for the last 15+ years

. I realize this is a huge project and while I am not in debt I do not have a great supply of funds for a complete project. However I would like some feedback on roofing options. I have had a couple roofers look at the slate saying about 300-400 pieces could need replaced. I know the historical value and look of the slate is what i would like but I also have been thinking about a steel roof. There was not a big difference in the price quotes for slate or steel. I think I know the response I am going to get but I am curious. Thanks and I am happy I found this site.

First... Welcome to the forum!

What a beautiful house. I certainly don't blame you for wanting to save that house.

Be careful about what roofers tell you. There could certainly be the chance that they could be looking at grabbing the slate for themselves while talking you into some other roofing. Make sure you trust the roofer!

That's like tripping over a Yenko Camaro in the back barn

I would be leary about roofers as well. They do have very biased opinions on the products they sell. You need the word of a couple heritage slaters in there. The slate is just too damn badass in the end

Quite a few of them have the bottom edge broken (from the pics) but that does not compromise the weather tightness if the headlap (overlap of upper and lower slates) is still in place.

My concern is that dormer that is tilting at a different angle than the roof line. Water has definitely gotten in there and messed with a supporting member at some point and/or currently. Probably a failure in the built in box gutters at the rear.
Not a huge huge deal in the end.

Do you still have the modillions that go under the soffit that are missing?
Drew Skuce
Paradigm Shift Customs - Heritage Building Restoration
44 Holme St. Suite #100 Brantford ON Canada N3T 4Z7
http://www.ParadigmShiftCustoms.com
Top

I love your house!

That said, I, too, would hesitate to trust the roofers. My parents, who live in Erie, PA, had their roof redone a few months back, and the roofers were telling them of the last job they did. Guy bought a historical mansion and wanted the 'ugly green roof' gone, and replaced with asphalt shingles. Did they tell him that it was copper and would NEVER need replacing? No. Did they give him a price reduction since they probably made 5x the cost of the project in scrapping all that copper? No. And I know that slate roofs are almost as valuable.

Maybe it would be worth paying a few hundred to get an inspector out there. One could go through the whole house and give you a list of everything that would need fixing, including the stuff that needs to be taken care of immediately to prevent future problems. That would give you an idea of what you're getting yourself into. Just take what they say with a grain of salt, some can have a distaste for older houses and make things sound worse than they are.

All that said, I would strongly encourage you to keep the slate. I just can't see a steel roof having the same elegance and charm as the slate. But I have a borderline fetish for Mansard roofs (it is probably my favorite house feature...alas my own lacks one), so I could be a bit biased/extreme on this point).
Laws of Home Repair:
1) It will be more difficult than you think.
2) It will take much longer than you think.
3) Murphy's Law is in effect tenfold. 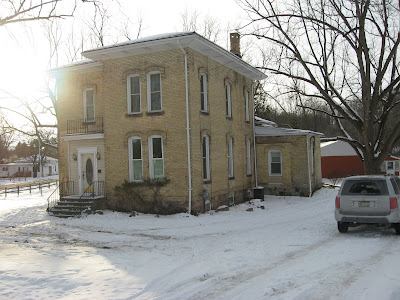 also welcoming you to the forum!

you have a great house there. is the main roof also slate?

i agree that roofers are often highly suspect

and that you should save the original slate roof. try reading the slate roof bible......

That house is so beautiful!

If it were mine and the cost was similar, I'd keep the slate.

Welcome....where is this house( state). It's great that you want to restore something that has been in your family for so long. If your great grandfather was 102 when he died and if he died this year he would have had to have been born in 1908 not 1920....

Good Luck with the renovation...beautiful place...

So much wonderful stuff: Original windows are a gift that money almost can't buy...the bell says "family farm" as few other details can

I can't wait; it's always such fun to go through the whole rewarding process with you! (Well, okay, just vicariously. But as you'll find, few things are more refreshing than looking at the same crap you had to deal with, only in pictures of someone else's house.)

I couldn't resist saying hello after falling in love with your house. It's absolutely beautiful and oozing with character. You're not crazy at all for taking it on and as someone who took on a fixer with no money to do it I can tell you that there's no such thing as impossible. I've found that the only thing the lack of budget really affects is time.... it just takes longer to accomplish things. Still, it's definitely worth it.

Rebecca
1820's Urban Farmhouse in Eastern Ontario
(The picture is the "before" picture... before the PO's bought it and destroyed it. We're still trying to get it back to that.)
Top

Wow such great feedback and so many responses. Thanks! I love the house as well, it gets even better on the inside! If I do decide to go metal you can be sure that in the contract I will be keeping the slate, even if I have to take it off myself, however I hope to keep the slate look.

Skuce-Yes I do have the "knees" or "Modillions" some are is great shape others need replaced, I would love to keep the box gutters an replace the modillions

cycloneofRed- I thought about getting an inspector but I am afraid they may condem the place and make it unhabitable. I am trying to get a family friend that is a build come take a look though

angolito- The main roof is slate as well, except the very peak there is a raised 6x6 wood section covered in tin

sundine2- my bad on the years I was giving a general reference period, he actually passed away in 1997, so he was born in 1895. It is located in NE Ohio, East of Alliance.

Thanks for all the support, I have been dreaming of restoring this house for several years now but the problem lies in the ownership as 3 family members(1 grandma and 2 distant cousins) own parts of the property and I am having trouble convincing one to sell me their part.
1883 Victorian Farm House built by my great-great-grandfather