I was able to pick up six 14 foot pieces of salvaged pine flooring from a guy last week, with hopes to use it to patch a few huge areas of my dining room / study floors downstairs. I was excited to get them so cheap and to find out that they are beautiful under all 3-4 layers of paint!

However, they don't match my pine floors at all, as I quickly discovered when I sanded a test patch in my dining room.

The salvaged pieces are very "white" and have a light honey colour when wiped down with a wet towel (to simulate a clear finish). My floors are VERY "orange" and they give off an amazing aroma when sanded and wiped down.

Anybody familiar with what the differences in these types of pine might be? According to the PA DCNR, these are the common types of trees here in my area. There is also a type of pine called Radiata which is what the lumber distributors were going to sell me if I was going to buy new lumber.

Either way, my "orange" pine floors are going to be gorgeous - nail holes, gaps, dents, and all. That's the kind of character I really enjoy in an old house. I just did a quick pass with my orbital sander just to get the dirty top layer off.

In case it matters, these are the original floors in my house (~140 years old) and the salvaged pieces are from an old house of unknown age but the guy found a newspaper clipping from 1910 attached to the lumber.
The McCullough/Simkins house, built 1872-1877:
Progress thread on Old House Web
Top

Your old floor looks like virginia pine (soft, slow-grown heart pine) but the replacement stuff could be eastern hemlock or spruce. With some toning from the finish (shellac) or an overstain, I think you can get a close tonal match, even though the grain of your old flooring is finer.
Casey

Cool, thanks for the info. It is quite soft, i.e. fingernail-can-dent-it soft, but I figure if it survived the house's first family (2 adults and six children) then it will survive with just myself and Nikki and some cats. I was told that it would probably be heart pine, but that was not indicative of the species. Unfortunately it's still winter here so I can't do any major sanding (no way to evacuate the dust) but I am excited to get it all sanded down and finished once the weather breaks.

I was looking into tung oil and shellac as my two finish options. When I mention shellac to the paint store clerk or my relatives in construction, I always get a weird look. Everybody says use poly, but I think it makes the floor look like plastic.
The McCullough/Simkins house, built 1872-1877:
Progress thread on Old House Web
Top

Hi neswick...if you go with Tongue oil you will have re-apply it periodically as it doesn't have the wearability of a poly finish. But it would give you a deeper more subtle finish and not just look like it is sitting on the top. On the other hand you could
use a mat, or low luster poly finish that could look quite nice and be easier to look after.
putting the 18 back in my 1872 Victorian farmhouse.
Top

The more I'm researching, I think pure tung oil might be a little too much for me to handle at this point (maintenance wise). Refreshed every year? Not gonna happen here.

Waterlox sounds like an awesome option though. I see that several members on here have used it, and it comes highly recommended across the internet. I understand that it is a tung oil and varnish blend. 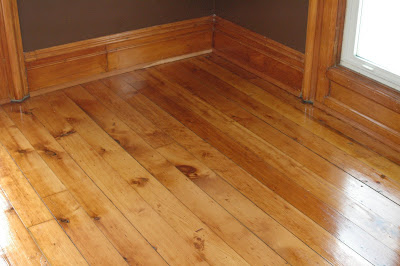 If Amercian larch looks anything like European larch this is what your original floor might be. Slightly (if i grew in the mountains much) harder than pine and looks very nice.

Still, it's beautiful flooring! We bought it for two rooms in our renovation for which we don't have any salvage. Room-length 10" wide T&G planks.
The bad thing with electricity : it almost always works.

Texas, I like the look of your larch quite a lot. We have larch trees growing around here, mainly scattered about fields and backyards, but I don't recall seeing too many large ones in my travels through the woods (though all of the virgin larch may be long gone because of de-forestation). When I did a Google search of American Larch floors, the examples there are not as intensely orange as my original floors. Mongrel may be on the right track with his suggestion of Virginia Pine, as that does appear to be the right hue of orange. Mine also has massive knots and knot holes and the larch seems to be much clearer with smaller knots.

This example from http://www.oldhouseonline.com may fairly closely represent what mine will look like, though these are professionally oiled and re-finished. It is "200 year old heart pine".

Cool! I'm really looking forward to seeing your floors once they're done!

Initially we wanted to use reclaimed pine (12" planks) but upon closer inspection most of them were too far gone to reuse as a complete floor - well worn, big chunks missing from where some moron installed an oak herringbone floor on top using ring shank nails and some just plain bad right from the beginning, chipping off along the growth rings (I used to know the proper term for that kind of behavior, but I forgot it). So in the end we decided to buy new flooring for the back bedroom and possibly the kitchen (unless we stumble across a large amount of decent salvage flooring) and use the old pine for the living room.
The living room is quite a mix - we could save some of the old 12" pine planks which were mostly wet-rotted from below, then we have some salvaged pine subfloor planks and if that isn't enough we'll use the leftover salvaged pine.

For the hallway (which will get most traffic) we used salvaged oak T&G, 3 and 3 1/2" wide. Apparently it came from several different rooms, some of which fared considerably better than others. The worst ones have plenty of chunky screws in them because someone laid down luan and roll vinyl on top.

That's the worst of the oak:

That's how far I got installing the floor... and I might even have to take it up again because the sleepers are too high, higher than the door frames.

The tongues and grooves don't quite fit, so there are some small gaps, but we can live with that. I hope to get it installed during the Easter holidays, but I have no idea when we might get around to sanding and oiling.

BTW, the white stuff is perlite. The floor is concrete slab, then some kind of felt they typically use in road construction, heavy plastic, small blocks of wood and sheets of cork for leveling and sleepers on top (dimensional 2x3).
The bad thing with electricity : it almost always works.

Don't get me started on ring shank nails - that's what they used to nail down the sub-floors on top of this pine. They were stuck so well that the majority of the nails stayed put, tore through the sub-floor, and had to be manually removed afterward. They were about 1 and 1/4 inches long. The sub-floors were made of a pressed chip-board type garbage (perhaps the precursor to today's LDF fibreboard), probably quite flammable and toxic too.

Luckily the only damage they did was leave large holes in the floor after removal - nothing seemed to split or crack. Oh well, the holes add "character".

I'm not knocking your workmanship or anything, but aren't wood floors supposed to be installed parallel to the longest run of the room - i.e. in a hallway, it would run with the length of the hallway and not across it? BTW that road construction felt is awesome - my dad gets it from this guy he knows and we use it for everything from a weed barrier in the garden to gravel underlayment for driveways.
The McCullough/Simkins house, built 1872-1877:
Progress thread on Old House Web
Top

Ours were 2"... what a pain to remove! Usually they took a substantial chunk of wood with them, especially as the parquet was of course blind-nailed so the nails were set at an angle.

The direction of flooring in that hallway was actually subject of lengthy debate. We had the options of either going with the direction of the light or with the long side, which we ended up doing. Since the hall is L-shaped the corner where we started has very short boards. This section is only about 2x3'.
The bad thing with electricity : it almost always works.