It's been quite awhile since I posted an update. Mostly, that's just because I haven't made much visible progress. I am just about done stripping paint in the bathroom; I'm going back and catching little bits between boards, that I missed the first time around. Next weekend, I'll try to remember to take my real camera, and get some decent pictures.

Last weekend was somewhat frustrating, because I started work on the bathroom window. Not only did I miss a glazing point, and break a piece of glass, but I found out the window frame is made of a different species of wood, and it much softer than the oak I'm used to. So, I gouged and scorched a few spots.

Then, there are areas where any shellac that might have been there originally, was gone after decades of steam/condensation, so some of the paint didn't want to come off at all.

Today wasn't very productive, but I did make a major score.

At work, we were recently hired by a developer who wants to restore/transform a nearby mansion into a residence for girls attending college. We were hired to give him drawings of the house's current layout, and then to provide drawings which he will use to obtain the proper permits from the city. While field-measuring, we noticed that there was an old stove in the basement. At our next meeting, we asked him about it, because it was too interesting to just throw away. He said if we could find someone to haul it out of there, they could have it.

So today, a group of friends and I went and hauled out the stove, and now I'm the proud owner of a 1930's Detroit Jewel 4 burner stove. It looks a lot like this: (ebay listing: http://www.ebay.com/itm/ANTIQUE-VINTAGE ... 0809906974) (image hosting site: http://www.auctiva.com/hostedimages/sho ... 0&format=0) but mine is more of a bisque color, not white. I'm not sure if mine works, or not, though. It has a lot of interior rust, from sitting in a basement. I'll try to remember to take pictures next weekend.
Top

As promised, here are some new photos of my stove, and the little bit of progress I made scrubbing the paint residue off of the woodwork in the bathroom. Phew, looks like you have been busy - way to go, keep up the good work!
1904 Victorian 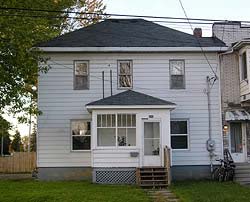 Thanks for the encouragement! It's good that I'm working full-time, but that means I only get one day a week to work on the house. So, it feels like progress is crawling along. It also doesn't help that I can't seem to find 3 reputable plumbers to give me a quote; they're all too busy! Even though it might sound like it, I'm not complaining about working full-time, or that our economy is strong enough to keep plumbers busy.

Mostly, I've just been puttering about. But the plumbers have been busy--and they aren't done yet. And, as of today, I have running water!!! Even the old water heater still works... for now!

After closer inspection, the wood floor in the upstairs bathroom was already damaged, to put in the "new" toilet in the 50's. They cut a square hole in the floor to put in a new flange, and then toe-nailed the boards back in place. So, I gave the plumbers permission to cut through the floor to replace the old drain lines. The bathtub has a drum trap, and every plumber that looked at it said it should go. By letting them cut through the floor, also means that I've saved the pristine plaster ceiling in the front parlor, too.

Now, I'll probably put down a plywood sub-floor on top of the existing floor, and install linoleum. I'd like real linoleum, but if cost becomes too much of a factor, I might go with sheet vinyl for now. I don't have high hopes, but I'm also going to research what kind of base is needed for a hex-tile floor; I don't want a huge elevation difference between the bathroom floor and the hallway floor.
Top

For tile, you will hear a lot of varying opinions. The "old" standard was plywood, grout, and tile, but now they are really pushing for that Shleuter system (which I don't like - my friend used it in his bathroom). That will add another 1/4" or 1/2". In mine, I used a thick 3/4" plywood over the existing (ruined) pine t-g. The main thing is that the floor must be very stiff and solid (no flex or movement, or as little as possible).

There's also some people who will do plywood, then cement board, then grout and tile, but that's pushing 2" thick. Mine (with just the 3/4" ply and tile) is already 1 1/4" higher than the rest of the original upstairs floors, so I had to make a custom wood transition piece, and it's not TOO bad, but I'd definitely not want to go higher. You can see it below: 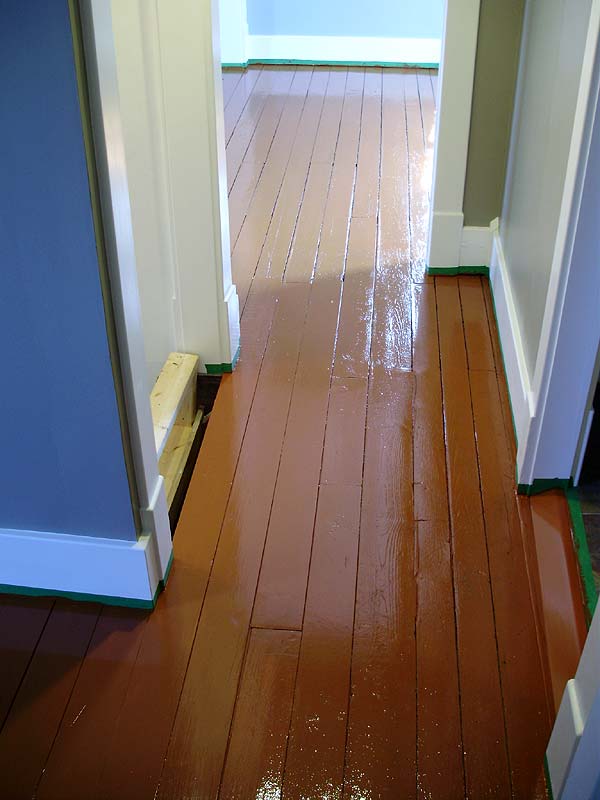 I think that with hex tiles, you have very little chance of breaking any tiles, since they're so tiny, but you always run the rist of cracking grout lines if the floor has flex or is bouncy.
JC
1923 Foursquare
Clockmaker, & Old House Enthusiast
http://my1923foursquare.blogspot.com/

Yep, it's the grout I'd be worried about.

I like your threshold, it seems period correct. So, maybe I can consider tile after all?
Top

I *LOVE* those green plastic tiles. We looked at a 1950's ranch with an AWESOME all green bathroom. Had the same green and black tiles with green fixtures. The whole place was a time capsule. I never thought I would be into mcm, but that place turned me around (we didn't buy it, it just wasn't in the right location). Probably helps that green is my fav color, lol.

The whole house is really quite a place. Lovely woodwork, love the fireplace!
The Cottage Blog: http://eclecticcottage.blogspot.com/

eclecticcottage wrote:I *LOVE* those green plastic tiles. We looked at a 1950's ranch with an AWESOME all green bathroom. Had the same green and black tiles with green fixtures. The whole place was a time capsule. I never thought I would be into mcm, but that place turned me around (we didn't buy it, it just wasn't in the right location). Probably helps that green is my fav color, lol.

The whole house is really quite a place. Lovely woodwork, love the fireplace!

Thank you! I still have many of those tiles, if you want them!