I am planning on adding picture rails in the dining room as a restore the room (I'm not sure if it had them originally or not). I'm not sure where to put them however. I've looked through pictures that show them running horizontally between the trim elements of doors and windows. However in my house, the windows are taller than the doorways. Which line should I chose?

This is a crappy photo that doesn't show you the door, but I believe our windows are also taller than our doors, and our picture rails run level with the tops of the doors and - as you can see here - the top of the actual glass part of the window rather than the window frame. I can try to get some better shots if that would be helpful. 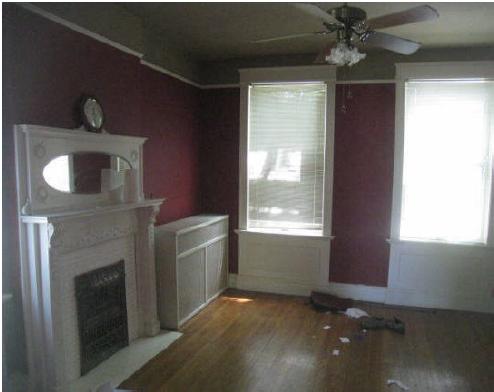 Thanks for the response. Yes, that makes sense. Thinking about it, that is the direction I'm headed. For now at least... lol
Top

My picture rails are setup so they run at the top of the trim at the doors and windows.

Hope I'm not being a wet blanket by saying this, but all the picture rails in my house run where the wall meets the ceiling; sort of like a crown molding.

But, as the others' pictures show, you can have more design options (with color, for example) when the rail is held lower.
Top

I have ceilings about 9' 9", so I ran all new picture mold at the 8' line. IMO it breaks up the wall area just right. I painted the ceiling color above the pic mold.

the picture rail looks great at that height as so all the wonderful keyboard instruments. Love them!
Top

Mind if I hop onto this discussion?

Every room in our house except the upstairs hallway, kitchen, bathroom and diningroom has picture rail at the ceiling. In our attic we have many pieces of what looks to me like picture rail - some even has "dining room" written on the back of it. I have often wondered if it would have been at the ceiling, like the rest of the house, or maybe even at the chair-rail height. At some point there was a plate rack put into the diningroom, on 2 walls at about the level that I would think lower picture rail would go. Perhaps the original was taken down to allow for this plate rack. Any thoughts? Would it look weird if we tried to put it back up, when there would be the plate rack about 3 feet below? It is un-painted, not like all the rest throughout the house, and I hate to have it wasted by sitting in the rafters of the attic... <sigh> Just fishing for input/comments. Thank-you for the audience

Picture rail just below (1/4") the ceiling was one of the choices then as now. It really depends on the effect one is after. It had to do with the wallpaper, I believe. The low-hung pic rail defines a frieze area which can be exploited by the right papers.
Casey

I have large crown molding (about 6"), and the picture rail is directly below that. My ceilings are just shy of 10'.
Top
Post Reply
41 posts