I have a roof leak and had 2 roofers out for estimates. Both say they can't find the source of the leak and insist the entire roof needs replacement. It's only 11 years old! I'd appreciate any advice. Roof replacement isn't possible for us right now.

Roofing contractors probably make their largest profits installing roofs. It's understandable that some might not want to spend their time chasing leaks during a visit for an estimate. Before calling in a roofer, however, diligent homeowners can perform a few simple tasks to help define the scope of work that might be necessary. Also, roofing consultants have plenty of experience tracking down particularly elusive sources of roof leaks, without selling new roofs.

Is it old or active?

If water drips out when it rains, that's an easy call. If you've just discovered a stain that may have existed before, it can be difficult to determine if it's from a condition that was previously repaired. Home inspectors have special meters that measure the moisture level of a stain. If readings are anything but "dry," it's likely that the stain is the result of a recent leak. A homeowner can simply use a pencil to outline a stain, then check to see if the stain grows after the next rainfall. 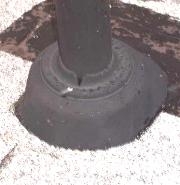 Does it get wetter when it isn't raining?

Huh? I get to see plenty of moisture, stains, and even damage that occur from moisture that condenses. There's a lot of water vapor generated inside homes. Bathrooms without exhaust fans or fans not vented to the exterior, leaking dryer vents, damp basements, and exposed soil in a crawlspace can put an excessive amount of vapor in the home or attic. Improper roof ventilation or uneven insulation can create "cold spots" where moisture condenses to the point of dripping onto the ceiling or wet areas on the underside of the roof sheathing. 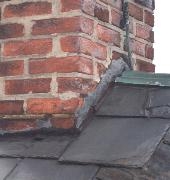 If there is air conditioning equipment in an attic, it's not that unusual to find condensate dripping out of the system or off of the refrigerant lines or ducts

Some areas of the country require fire suppression sprinkler systems in new homes. There's often piping in the attic that has been known to occasionally leak or even burst in freezing weather.

No, it's definitely a roof leak.

After ruling out interior sources of moisture, you're convinced that it's the roof. In my experience, it's rarely the roof itself that's actually leaking. If the roof covering is deteriorated or damaged from wind, hail, tree branch, critter or human, it's possible, but these occurrences are usually rare.  I find it more common for roof "systems" to leak at penetrations, terminations at walls or chimneys, or where roof surfaces change direction.

Where plumbing vent pipes penetrate the roof surface, there should be a tight collar, attached to a flange. Some older lead collars can loosen over time and even some newer rubber collars crack and leak long before the shingles fail. 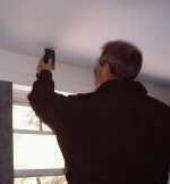 Where a chimney interrupts the roof, there should be step flashing installed where each course of shingles meets the masonry. A counter flashing is then installed to shed water, running down the sides of the chimney, over the top of the step flashing.

Roof-to-wall joints should also have step and counter flashing, although the siding on the wall often acts as the counter flashing. What can appear to be a roof leak is often from water entering the wall above where it meets the roof.

Valleys are formed where opposing roof slopes meet. These handle a considerable amount of water that has collected on the two surfaces above. There are different methods of constructing valleys with some having seams that can be the source of a leak.

Many times the above details have been "repaired" with roof cement. This gooey black tar should be considered an unprofessional temporary repair. When older homes have roofs replaced, some contractors don't take the time to properly re-install these flashings or replace them as needed. Roof cement often becomes a time saving short cut that lasts just long enough for the contractor to disappear.