When to Hire a Contractor

We are combining a hallway bath and a master bath into one. To save some money, we are subcontracting all of the jobs out ourselves. So far, so good. Our plumber has roughed in the plumbing and we are ready for some minor electrical work, and then comes the carpenter and drywaller.

The extent of the carpentry work is framework for a drop-in tub and patching a few holes in the floor where one of the old toilets was located. We may try this on our own since the carpenter is coming in really high on his quote. Do you know where we could get our hands on a manual for framing a tub? Your thoughts?

Framing a platform for a drop-in tub isn't hard, but let's get to that later. 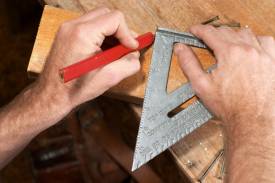 The larger issue is what it's like acting as your own general contractor. It's harder than it looks, as you already know.

When you hire a GC, it becomes his or her responsibility to line up subcontractors and make sure they get their work done in a timely (and workmanlike) fashion. Oh yes, and stick to the budget.

Keeping subs on track and on time is one of the hardest parts of being a GC.

Many homeowners have decided a general contractor is worth the extra cost if only to avoid all those Excedrin headaches. Of course, there are plenty of others who have done exactly what you're doing.

It can work either way. But as you've discovered, there are some risks.

Good general contractors usually develop a reliable network of subcontractors who work for them over and over again.

Most have endured a few duds the drywaller who calls to cancel the day he's due to start, the painter who fails to show up Monday. Or Tuesday. Maybe it's an insulation contractor who has to be called back two or three times to get the job done right.

In time, general contractors find the good ones. So they do what they can to keep them, and that means giving them regular work.

When our hypothetical general contractor, let's call her Sally, needs an electrician for a job she calls her regular. Let's call him Bob.

"Bob, I need a new master bath roughed in next month. Can you work me in?"

That's probably about all it takes.

When a homeowner calls, Bob doesn't have as much of an incentive to jump. For him, it's probably a one-time job and he has no idea whether the homeowner has any idea what he's doing. It could get complicated and time consuming. And Sally has first dibs on his time.

From the homeowner's perspective, it takes a frightening amount of time to hunt up potential subs, vet them, and arrive at a price.

Sometimes things don't work out as planned. If the job is already underway and the price suddenly seems too high you can look around for another carpenter. Which may slow up the job. Or try to do a job you're not sure how to do.

I know I'm grossly over-simplifying this, but that's the gist of the problem.

Framing for a tub

To frame a tub platform, go to the web site of the tub manufacturer and look up the model in the "products" section.

Chances are you'll find an installation document with plan and elevation views, plus dimensions, of what the tub needs in the way of framing.

A good book (like Rob Thallon'sGraphic Guide to Frame Construction from the Taunton Press) may give you some general pointers about framing.

But experience counts for a lot.

If it looks like this job is over your head, you'd be far better to hire the carpenter and get the job done right than be wondering what that odd cracking noise is the first time you fill that big Jacuzzi to the brim.