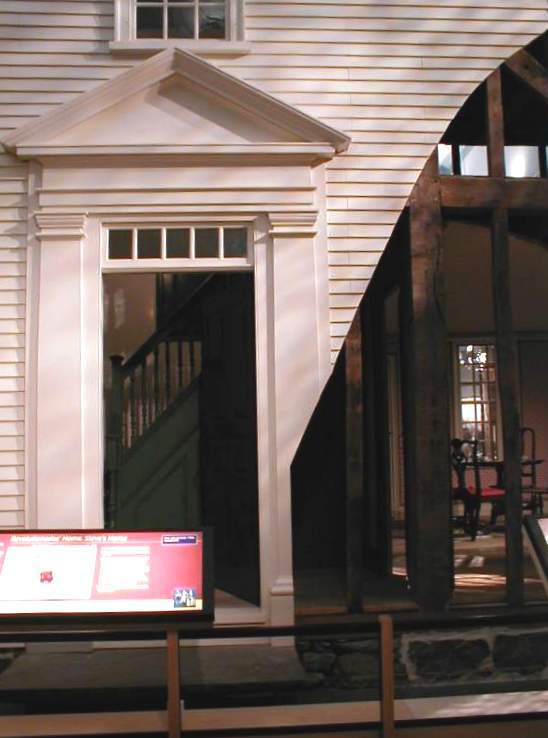 "Within These Walls...," theSmithsonian's National Museum of American History's newest exhibit showcases 200 years ofAmerican history as seen from the doorstep of one house that stood from Colonialdays through the mid-1960s in Ipswich, Mass.

The4,200-square-foot exhibit tells the story of five ordinary families whose liveswithin the walls of the house became part of the great changes and events of thenation's past.

The largest artifact in the museum, the Georgian-style, 2 1/2-storytimber-framed house was built in the 1760s, 30 miles north of Boston andstood at 16 Elm Street until 1963 when efforts by Ipswich citizens saved it fromthe bulldozer.

Today, the house is the centerpiece of "Within These Walls..."Visitors can peer through its walls, windows and doors to viewsettings played out against the backdrop of Colonial America, the AmericanRevolution, the abolitionist movement, the industrial era and World War II.

"Ordinary people, living their everyday lives can create extraordinaryhistory," says Spencer R. Crew, director of the National Museum of AmericanHistory. "This exhibition looks at history in anew way, a history that begins at home."

The exhibition's curatorial team researched nearly 100 occupants who oncelived in the house. Their stories show some of the ways Americans have madehistory in their kitchens and parlors. Inside this house, American Colonistscreated a new genteel lifestyle, patriots set out to fight the Revolution, andan African-American struggled for freedom. Neighbors came together to endslavery, immigrants made a new home and earned a livelihood, and a woman and hergrandson served on the home front during World War II.

History through the lives of five families 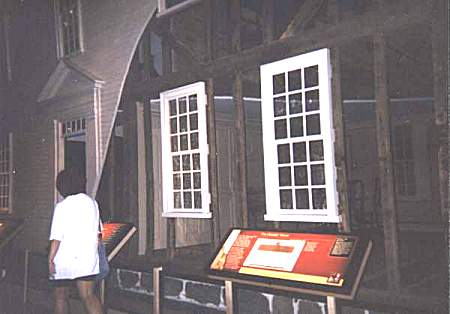 For the exhibit, portions of three rooms and the entrance hall have beenrestored and furnished with objects from the period to show activities thatwould have taken place in the house. Interactive educational activities and audioexperiences are also featured, includinga 19th-century laundry simulation, tactile models of the house and examples ofearly American building techniques, such as mortise and tenon joinery.

The main section of the house was built in the 1760s forAbraham Choate. He purchased the lot for his home in 1757, in the center ofIpswich, then a busy center of maritime commerce. Choate, a gentleman merchantattached part of an older structure, built about 1710, to his new house. The newhome provided enough room for Choate's eight children. Other owners added atwo-story addition and one-story sheds in the 1800s.

The Choate parlor is elegantly set for tea, an unusual use in the 1700s when most people lived incramped houses of one to three rooms, and few families could afford the luxury one room for entertaining.

Abraham Dodge, who fought at the battle of Bunker Hill in 1775, bought thehouse two years later. His household was transformed by the American Revolution. By1786, the year of Abraham's death, the Dodges were no longer British subjectsand slavery had legally ended in Massachusetts. Chance, an African-American man,remained in the household as Dodge's servant. The war years left Dodge in debtand his family was forced to sell the house after his death.

Josiah and Lucy Caldwell bought the house in 1822, and in the followingdecades it became a part of the most controversial social reform of their time-- abolishing slavery throughout the nation. A parlor setting showcases the roomas the center of the family's religious and social life. A newspaper ad from1839 tells us that Lucy hosted meetings of the Ipswich Female Anti-SlaverySociety in her home.

As industrialization swept through Ipswich, the house was purchased as aninvestment in 1865 from the Caldwell estate by the wealthy Heard family anddivided into rental apartments. Among the Irish immigrants living here wereCatherine Lynch and her daughter Mary. Mary worked in a hosiery mill andCatherine took in laundry. Some years, she paid part of her rent by doing washfor the Heards. An exhibit vignette gives visitors a sense of what doinglaundry was like in the 1870s and 1880s.

The final setting is the kitchen of the house where by 1942 Mary Scott andher family were part of the war effort. Set with canning equipment, the roomillustrates how Mary worked with her young grandson Richard Lynch to growvegetables, conserve fat and save tin cans, while her two sons went off to war.Her daughter, Annie Scott Lynch, worked in a factory making war materials.