Architectural Salvagers Save History, One Doorknob at a Time

If you're working on an old house, you're probably in the market for period hardware or fixtures every now and again. It could be a porcelain door knob, a pedestal sink, or a passage door, but it needs to match what's already in the house, or at least look historically possible. 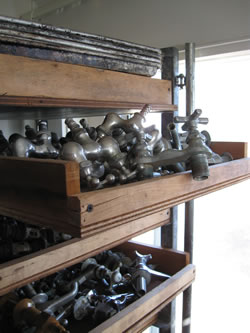 Any number of companies sell reproduction period hardware. Whitechapel Ltd. of Jackson, Wyoming is one of my favorites. In the pages of its thick catalog you can find hinges, door knobs, and cabinet pulls of every description.

Sometimes, though, old and worn is more appealing than new, and for that you need a particular kind of specialty retailer, the architectural salvage yard. They definitely don't have the polish (or the prices) of a real antique shop, but they're way more interesting than a used furniture outlet.

Architectural salvagers have elements of both antique and junk, and that makes them good places to browse away a spring afternoon whether you need anything in particular or not. If you're refurbishing an old house, or starting a tool collection, these places are a godsend.

There is one not 10 miles from where I live, and into this warren of packed-to-the-rafters storage trailers and muddy paths we descended one recent Sunday afternoon for a look around.

The only thing on my list was a pair of horseshoes (the kind you throw, not the ones for shoeing a horse), but it's impossible to say what you might come across in the process.

In the first five minutes, I'd found a 10-foot long stainless steel countertop with integral sink. It was commercial grade, probably from a restaurant kitchen. They're very expensive when new, and this one would have made a handsome centerpiece for someone's kitchen.

But judging from my wife's reaction, not our kitchen. So I moved on.

I took my friend Tom down to the last trailer on the path, which is crammed with bins and trays of hinges, old faucet parts, and other odds and ends. There was a great heap of chrome bathtub fixtures in one corner, which would have been perfect on an old claw-foot tub. Also not on my list but good to know where I could get a Victorian era faucet if I should need one. 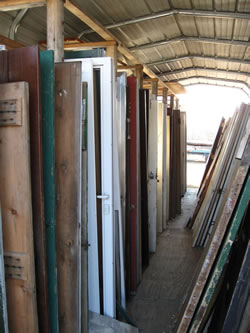 In the trailer next door, hammers, chisels, wood planes, ancient pry bars, and brass blow torches sorted into boxes and bins. The prices seemed a little steep, but still a great deal less than what you'd pay for new, and with a little elbow grease these tools would be serviceable again. That's the thing about a lot of old tools--people seem to lose interest in them long before they are really worn out.

We are almost ready to leave when I'm reminded we came here for horseshoes. Hanging on a rack at the front of the yard are several pairs.

"But," I counter, "I only need one pair. Would you take five bucks?"

No he wouldn't. Even more telling, he did not make a counter offer.

I think I would have gone to $6 for the pair if he'd been willing to dicker. But I was not going to spend $15 or $20 for a set of four. So we parted company that day without making a deal.

Sometimes you just have to know when to walk away.