A passage from Charlotte's Web, by E.B. White: 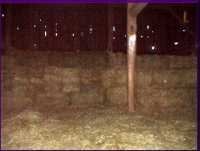 "The barn was pleasantly warm in winter when the animals spent most of their time indoors, and it was pleasantly cool in summer when the big doors stood wide open to the breeze. The barn had stalls on the main floor for the work horses, tie-ups on the main floor for the cows, a sheepfold down below for the sheep, a pigpen down below for Wilbur, and it was full of all sorts of things that you find in barns: ladders, grindstones, pitch forks, monkey wrenches, scythes, lawn mowers, snow shovels, ax handles, milk pails, water buckets, empty grain sacks, and rusty rat traps. It was the kind of barn that swallows like to build their nests in. it was the kind of barn that children like to play in. And the whole thing was owned by Fern's uncle, Mr. Homer L. Zuckerman."

Having spent many glorious childhood hours in my grandfather's barn on a dairy farm in central Connecticut, this passage almost brings me back there.

The barn was all of these things -- big and dark and mysterious -- but never scary. It had a comforting smell. It was a place to go when it was hot, or cold or when you needed a place to just stretch out on the hay without being noticed. And it did smell of sweet hay and oily farm machinery and musty darkness and animals.

The grindstones and plows and pitchforks and ropes and axes seemed somehow larger than life. We saw my grandfather fix and mend so many things with those tools. And though we were solemnly warned not to touch them, we couldn't resist when he wasn't around.

We never did get hurt on any of the tools, but we sure did try my grandfather's patience. We thought it was grand sport to jump from the top of the piled hay bales to the bales 10 feet below -- which had the unfortunate result of breaking the bales -- which then couldn't be sold. My grandfather would come in shouting at us, and of course, we instantly burrowed into the ruined hay, silent as mice.

One of the few times I saw my grandfather truly angry was the time my cousin "surprised" him by jumping from the hay drop to the stables below -- just as my grandfather passed by the drop. Much later we realized that he was more worried about us being hurt and far less concerned about our mischief. He had grown up at a time when children were expected to work as hard as adults on farms and when there were many gruesome accidents. He nailed that trap door shut that very day, and none of us dared to ever remove the nails.

I still find the smell of the earth and hay and oil comforting all these years later -- I really think that as kids if you offered us the choice of having this barn or an amusement park in our backyard, we would have chosen the barn without hesitation.