It took emergency measures to save a landmark brownstone from the jaws of demolition in Brooklyn, NY this year. But the owner--who, disputably, created the problem in the first place--stepped up repairs to convince building officials that the structure was safe. The New York Times reported about the determination by individual owner, Robert Providence, to hold onto the precious building, as well as the costly mistakes subcontractors made along the way.

The imperiled brownstone at 329 MacDonough St. in Brooklyn was shuddered in January when a load-bearing cellar wall crumbled. City officials suddenly feared that the building would collapse and create a domino effect, weakening the adjacent three-story brownstone neighbor at 331 MacDonough.

When the cellar wall came down gas pipes ruptured in both brownstones. City engineer Timothy Lynch, a former preservationist who works for the Department of Buildings (DOB), conducted an inspection and ordered the buildings taken down. The residents of 329 and 331 were relocated. 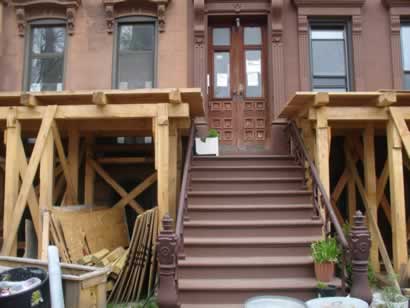 The emergency effort to build a new wall ended in victory for Mr. Providence. Brooklyn Supreme Court Justice Bert Bunyan ordered a stay in demolition so Lynch and staff could inspect the "36 tons of concrete and more than half a mile of lumber" Providence added to shore up the brownstone.

Meanwhile, Brownstoner, a blog that follows Brooklyn real estate and renovation, tracked the development of the MacDonough Street legal battles and subsequent work to keep the old house alive. Wood columns (called cribbing boxes) were installed to add stability, then concrete was poured into wood frames to create a new cellar wall.

Consequently, the DOB inspected the building. Four of the five engineers who went out agreed that the building was safe, and now the renovation can continue apace with the demolition order rescinded. Bob Marvin, one of the commenters on Brownstoner, remarked that coordination between DOB and LPC (Landmark Preservation Commission) “would be the best thing to come out of this situation.” He went on to say, “No one wants a futile attempt to save historic buildings that ends up with the cost of human life, but a breathing period… to assess the situation is certainly in order.”

Stuyvesant Heights was settled in the middle of the 17th Century and with Bedford, Ocean Hill, and Weeksville makes up what is today known as Bedford Stuyvesant. By 1838, it was one of three free African American communities in the United States. 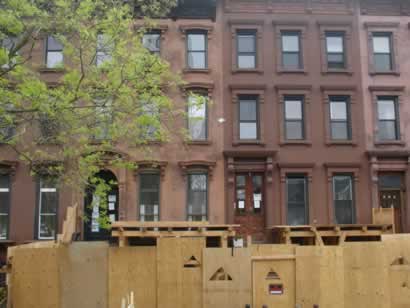 The Italianate style brownstone at 329 MacDonough, across from St. Philip's Episcopal Church, was first completed in 1873. Providence bought his brownstone in January, 2009, for $770,000 and reportedly spent his life savings on the purchase and subsequent botched renovation.

According to The New York Times, Providence had planned to rent out the top two floors in the Brownstone and completed renovating those floors. It was when he sent subcontractors to the basement that the troubles began. The work they were doing in the basement is under dispute.

Whether they were installing a boiler, as Mr. Providence suggested, or digging a trench to lower the floor, which city building officials have suggested, is still a mystery. However, the required city permits had not been issued for any basement work, whether the goal was a boiler, a trench, or a bowling alley. So here's a tip for homeowners: Get all required permits and use contractors who have relationships with your municipality!

Now, Providence must find funding to finish the building. And he may face fines for possible illegal construction.

Still, it looks like there will be a happy ending for the brownstone at 329 MacDonough and the neighboring buildings, and another victory for all the folks fighting to save and preserve old houses.

This sleepy, historic “Bed Stuy” street was lucky, but other imperiled houses in Brooklyn and New York might not have fared as well. According to the Historic Districts Council, many historically significant neighborhoods are not protected by New York City's Landmarks Law, which was enacted in 1965 to identify and protect buildings reflecting the city's cultural heritage. Parts of Kew Gardens, Williamsburg, the Lower East Side, Crown Heights, and Astoria Village remain at risk.

Whether protected or not, neighborhoods with historic houses fare better when homeowners band together to petition, to participate in city meetings, and to pursue media publicity. This was key to the Bed Stuy victory.

The work will include apartment building restorations, historic home preservations, modification of an old hotel into foster care housing; an education building offering "green studies"; and the restoration of a municipal museum.

There are plenty of success stories in saving and renovating old homes or converting historical buildings into residences. Old House Web former publishers successfully completed a home restoration of their 1878 Victorian. For a creative twist on historic preservaton, Doug and Jeanne Robinson transformed an old Maine bank into a home. They resolved heating costs in cold, cold Maine by adding radiant floor heat, a new zoned heating system, and new double glazed windows.

Woodrow Aames has written articles and profiles for Yahoo, Microsoft Network, Microsoft Encarta, and other websites and print magazines around the world. He holds an MFA degree and has taught English abroad.