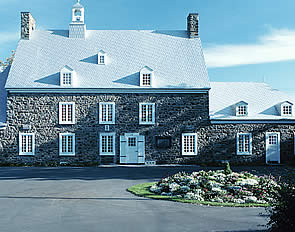 The original Cape Cod is a small, one-story house with a central chimney. The design evolved from ideas colonists brought to America from England. The one-room cottage that was so popular in England soon grew into a larger home while maintaining its simplicity. The availability of lumber, along with a population moving to the suburbs, helped expand the small-cottage design to a larger, more modern size.

The climate also helped design the Cape Cod. The originals were built as a strong shelter against the stormy weather in Cape Cod, Massachusetts. The houses were solid and sturdy, designed to hold up against the coast's fierce winds.

As with most housing styles, the Cape Cod saw an architectural evolution over the years, as builders adapted the style to fit homeowners' changing needs and tastes. A sharp contrast from the soaring three-story Victorians and the large, two-story Georgians, the modern Cape Cod gained wider appeal throughout the United States from the 1930s through 1950s. The simple housing lines, for example, gained a little detail as time went on, and external features like shutters were added to give the windows more appeal.

This was a time when mass production was changing the way builders brought their products to the market. There were soon hundreds then thousands of solid, affordable houses in suburban areas. Homeowners were attracted to the simple architectural design and economic price. This allowed them to venture from the city and start a comfortable, suburban family life.

In general, a true Cape Cod is small in scale and low to the ground. They are typically one story high with an attic. As the style evolved, a few dormers were added to bring in light above the first floor or attic. Some Cape Cods, however, do not have dormers. The garage often is detached and positioned toward the back of the house.

One element that sets the Cape Cod apart is its roof line. A Cape Cod roof typically has an eight-to twelve-inch pitch for draining purposes and a small overhang to reduce potential wind damage. Wood shingles or clapboards were a popular roof and wall covering.

As today's home owners look for larger floor plans and two-story living, they often wrestle with how to renovate a Cape Cod. The simple style is a sharp contrast to many newer housing styles that include two-story foyers, large eat-in kitchens, and oversized master bedrooms.

The way to approach such a project is to determine how an addition or attic expansion could enhance the living space. There are many ways to achieve a balance between the old and new, given the right design and detail.

Many people have added dormers and turned their attic space into a few bedrooms, office, or den area. The added light and walking space can make a significant difference in how the house looks and functions.

A kitchen and family-room addition also can add functionality to a Cape Cod's small floor plan. The key is to incorporate the same lines, window styles, and other architectural details when renovating. While the new version will not be the same small Cape Cod, it still can retain the charm of the original house.

The Cape Cod is a classic housing style that has warmed the hearts of Americans for more than 200 years. Whether you are renovating one to gain space or keeping its existing size, take pride in knowing that the style will continue to attract many people.