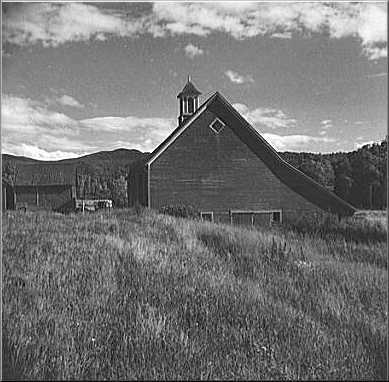 The first great barns built in this country were those of the Dutchsettlers of the Hudson, Mohawk, and Schoharie valleys in New York Stateand scattered sections of New Jersey.(2)

On the exterior, the most notablefeature of the Dutch barn is the broad gable roof, which in early examples(now extremely rare), extended very low to the ground. On the narrow endthe Dutch barn features center doors for wagons and a door to the stockaisles on one or both of the side ends.

A pent roof (or pentice) over thecenter doors gave some slight protection from the elements. The sidingis typically horizontal, the detailing simple. Few openings other thandoors and traditional holes for martins puncture the external walls.(3)The appearance is of massiveness and simplicity, with the result that Dutchbarns seem larger than they actually are.

To many observers the heavy interior structural system is the most distinctiveaspect of the Dutch barn. Mortised, tenoned and pegged beams are arrangedin "H"shaped units that recall church interiors, with columnedaisles alongside a central space (here used for threshing). This interiorarrangement, more than any other characteristic, links the Dutch barn withits Old World forebears.

The ends of cross beams projecting through thecolumns are often rounded to form "tongues," a distinctive featurefound only in the Dutch barn.

Relatively few Dutch barns survive. Most of these date from the late18th century. Fewer yet survive in good condition, and almost none unaltered.Yet the remaining examples of this barn type still impress with the functionalsimplicity of their design and the evident pride the builders took in theirwork.

The bank barn gets its name from a simple but clever construction technique:the barn is built into the side of a hill, thus permitting two levels tobe entered from the ground.

The lower level housed animals, the upper levelsserved as threshing floor and storage. The hillside entrance gave easyaccess to wagons bearing wheat or hay. (Fodder could also be dropped throughopenings in the floor to the stabling floor below.)

The general form ofthe bank barn remained the same whether it was built into a hillside ornot. Where a hill was lacking, a "bank" was often created bybuilding up an earthen ramp to the second level.

Bank barns were ordinarily constructed with their long side, or axis,parallel to the hill, and odn the south side of it. This placement gaveanimals a sunny spot in which to gather during ddr. To take furtheradvantage of the protection its location afforded, the second floor wasextended, or cantilevered, over the first. The overhang sheltered animalsfrom inclement weather.

The extended forebay thus created is one of themost characteristic features of these barns. In some bank barns, the projectingbeams were not large enough to bear the entire weight of the barn above.In these cases, columns or posts were added beneath the overhang for structuralsupport.

In the earliest examples of bank barns narrow-end side walls are frequentlystone or brick, with openings for ventilation. (Since "curing"green hay can generate enough heat to start a fire through spontaneouscombustion, adequate ventilation in barns is vital.)

Found throughout the South and Southeast, crib barns are especially numerousin the Appalachian and Ozark Mountain States of North Carolina, Virginia,Kentucky, Tennessee and Arkansas. Composed simply of one, two, four orsometimes six cribs that served as storage for fodder or pens for cattleor pigs, crib barns may or may not have a hayloft above.

Crib barns weretypically built of unchinked logs, although they were sometimes coveredwith vertical wood siding. Unaltered examples of early crib barns normallyhave roofs of undressed wood shingles. In time, shingle roofs were usuallyreplaced with tin or asphalt. The rustic appearance of crib barns is oneof their most striking features.

The cribs sometimes face a covered gallery or aisle running across thefront. In another arrangement, the cribs are separated by a central drivewayrunning through the building.

In double crib barns the second story hayloft is sometimes cantileveredover the ground floor, resulting in a barn of striking appearance.

George Washington owned a round barn. And in 1826 the Shaker communityat Hancock, Massachusetts, built a round barn that attracted considerablepublicity.(4)

Despite these early examples, however, round barns were notbuilt in numbers until the 1880s, when agricultural colleges and experimentstations taught progressive farming methods based on models of industrialefficiency. From this time until well into the 1920s, round barns appearedon farms throughout the country, flourishing especially in the Midwest.(5)

Round barns were promoted for a number of reasons. The circular formhas a greater volume-to-surface ratio than the rectangular or square form.

For any given size, therefore, a circular building will use fewer materialsthan other shapes, thus saving on material costs. Such barns also offergreater structural stability than rectangular barns. And because they canbe built with self-supporting roofs, their interiors can remain free ofstructural supporting elements, thereby providing vast storage capabilities.The circular interior layout was also seen as more efficient, since thefarmer could work in a continuous direction.

In general, multi-sided barns--frequently of 12 or 16 sides--are earlierthan "true round" barns. Earlier examples also tend to be woodsided, while later ones tend to be brick or glazed tile. Interior layoutsalso underwent an evolution. Early round barns placed cattle stanchionson the first floor, with the full volume of the floor above used for haystorage.

In later barns, the central space rose from the ground floor throughthe entire building. Cattle stanchions arranged around a circular mangeroccupied the lower level; the circular wagon drive on the level above permittedhay to be unloaded into the central mow as the wagon drove around the perimeter.

In the last stage of round barn development, a center silo was added whensilos became regular features on the farm (in the last decades of the nineteenthcentury). In some cases, the silo projected through the roof.

The claims for the efficiency of the round barn were overstated, andit never became the standard barn, as its proponents had hoped. Nevertheless,a great number were built, and many remain today the most distinctive farmstructures in the communities in which they stand. 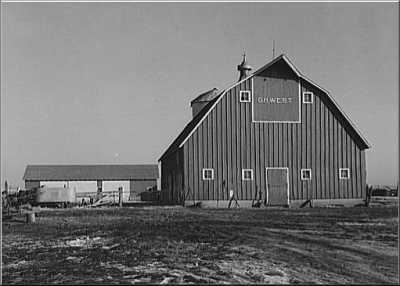 A peak roof projecting above a hayloft opening is one of the most familiarimages associated with barns. The feature belongs to the prairie barn,also known as the Western barn.

The larger herds associated with agriculturein the West and Southwest required great storage space for hay and feed.Accordingly, prairie barns are on average much larger than the other barnsdiscussed in this brief.(6) Long, sweeping roofs, sometimes coming nearthe ground, mark the prairie barn; the extended roof created great storagespace. (Late in the nineteenth century, the adoption of the gambrel roofenlarged the storage capacity of the haymow even more.)

Affinities of this barn type with the Dutch barn are striking: the long,low roof lines, the door in the gable end, and the internal arrangementof stalls in aisles on either side of the central space are all in thetradition of the Dutch barn.

The barn types discussed here are only some of the barns that have figuredin the history of American agriculture. As with Dutch barns, some reflectthe traditions of the people who built them: Finnish log barns in Idaho,Czech and German-Russian house barns in South Dakota, and "threebay"English barns in the northeast.

Some, like the New England connected barn,stem from regional or local building traditions. Others reflect the availabilityof local building materials: lava rock (basalt) in south-central Idaho,logs in the southeast, adobe in California and the southwest. Others arebest characterized by the specialized uses to which they were put: dairybarns in the upper midwest, tobacco barns in the east and southeast, hop-dryingbarns in the northwest, and rice barns in South Carolina.

Other historicbarns were built to patterns developed and popularized by land-grant universities,or sold by Sears, Roebuck and Company and other mail-order firms. And othersfit no category at all: these barns attest to the owner's tastes, wealth,or unorthodox ideas about agriculture. All of these barns are also partof the heritage of historic barns found throughout the country.