While pioneers to the Deep South found an inhospitable land of searing heat, merciless biting insects and semi-tropical rains, settlers to these new "rustic" deed-restricted, gated communities leave air-conditioned homes to stroll on paved streets and sidewalks leading to swimming pools and clubhouses. Promotional literature for one of the planned developments, Riverwalk, near Gainesville, boats of a "Key West style of architecture in keeping with the charm of the old Florida Cracker homes." Another, Seaside, claims that the pricey development is "more than design. It is a way of life."

Long time regarded as a poor relative in the family of American architecture, Cracker style is now being celebrated for its inventiveness and energy efficiency.

In its simplest form, a Cracker house is a wooden shelter built by the early Florida and Georgia settlers. Lured to Florida by cheap and plentiful land, these pioneers arrived with few provisions and needed to erect shelter quickly and cheaply. The brush provided abundant supplies of cedar and cypress. Rocks or bricks made of oyster shell and lime served as pilings to keep the shelters off the ground. A wide shade porch wasn't just an embellishment. In pre-air-conditioned Florida, the porches provided relief from the relentless sun.

The Florida Cooperative Extension Service notes the energy efficiency of the style it calls "Florida Vernacular:" Site orientation for shade, wide, covered porches, crawl spaces beneath the homes for ventilation, and windows that took advantage of cross breezes. Floor cracks "helped with house cleaning, and raised first floor was used to keep hounds (hunting) and chickens (food), which in turn provided service of consuming fleas and other pests," according to an extension publication on energy efficiency.

The simplest of these cabins were called single pen houses. As money permitted and family size dictated, these "single pen" square cabins often were added to, producing such fanciful names as "saddlebag" and "dog-trot" house. 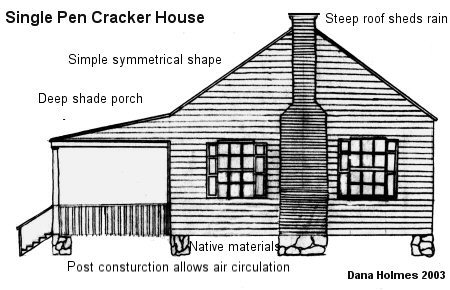 Transplanted Yankee Ronald W. Haase has done much in the past decade to publicize -- and preserve -- the homes of Florida's early pioneers.  Haase moved from New Hampshire to take a job as a professor of architecture at the University of Florida in the 1980s.. His book, "Classic Cracker" is an enthusiastic and detailed account of Haase's search for these wood-frame homes. Haase's research inspired him to design contemporary homes based on the energy efficiency and environmental synergy of Cracker farmhouses.

Single Pen: A log cabin with a single room with one door and a few windows. Window glass was often not readily available and mosquito netting or shutters were employed to keep out insects, making for a dark interior. A stone or block chimney was often placed at one of the gable ends of the house. A broad porch provided a relatively cool spot to sit. 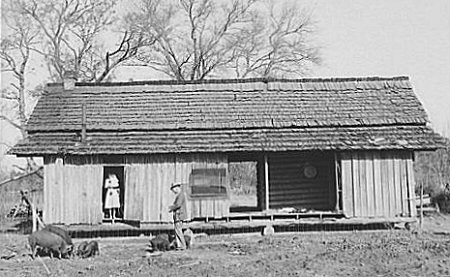 The Dog-Trot House: This familiar form of Cracker farmhouse has two pens separated by a central outdoor hall or breezeway. All parts are joined by a common room. A large shade porch spanned the front of the house, and additional porches and rooms, especially a kitchen, were sometimes added at the rear of the house. Chimneys were placed at each gable end of the house. The house was normally raised above grade and had large windows in each of the two front rooms, but lacked a front door. 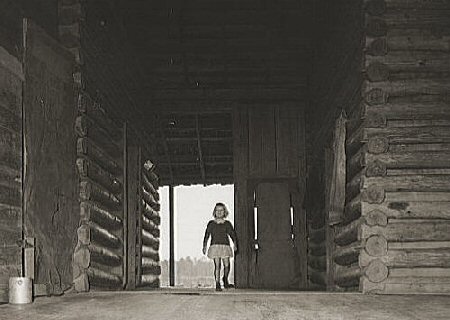 In contrast to the grand Greek Revival Plantations in other southern states, Florida's early plantation homes were simpler affairs. A prime example of this is the Kingsley Plantation (pictured below), Florida's oldest surviving plantation house, built in 1789. Sitting on a coquina (oyster shell) block foundation, the house consists of a rectangular great room with two fireplaces, and a large room attached at each of four corners. Porches run the length of the north and south sides of the house. An outside stairway leads to the second floor bedrooms and an attic. A trapdoor opens from the attic to the open-air observation deck. Typical of these early plantations, the kitchen is in a separate house attached to the main house. 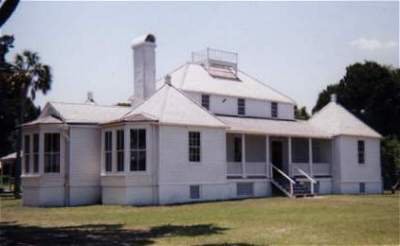 These cottages are included are Cracker style houses for their folk characteristics and double pen or saddlebag layout.  The Creole cottage typically has a built-in roof overhang and double front doors. Two rooms deep by two wide, the small wood-framed houses were built by Acadian settlers to the Louisiana Bayou. Unlike Acadian cottages in Canada, these homes had lower ceilings, as attic space was seldom used for sleeping in the south. A continuous pitched roof line covers the cottage and front porch. The house was serviced by one central chimney. 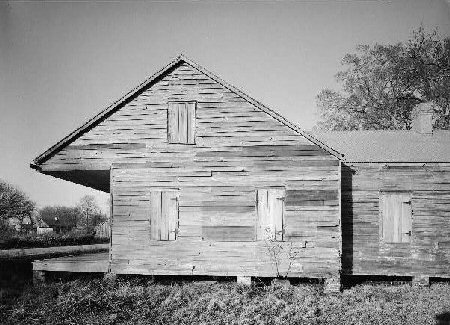 Double houses are were found on plantations throughout the Bayou Lafourche Region. The exterior construction is cypress board and batten because of the wide availability of native cypress. These double houses were built after the Civil War, most probably in the 1870s, by Burch A. Wormald. Originally two families occupied one structure, but sometime in the 1890s, they were turned into single family units. With the change, the basic four room unit was opened up by inserting doors in the partition walls. Front rooms then became sleeping rooms, and the back was reserved for cooking, eating and washing. These houses are the oldest tenant houses on the plantation. Originally there were 26 double houses, divided into two rows of 13, and separated by the plantations road and railroad track. Beginning in 1904, seven of the structures on the Western side were "broken down" or moved to make room for four rows of "shot-gun" houses.

Here are some suggested links on Cracker houses.

Exploring Florida, an educational web site for teachers and students produced by the Florida Center for Instructional Technology, College of Education, University of South Florida.