Grand, elegant homes with fine details defined the Federalist style, which was popular between 1780 and 1815. As the founding fathers were carving out a new nation, housing styles were changing to reflect the new ideals. 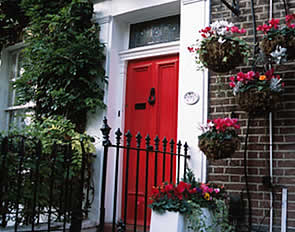 This historical period was a critical time in the creation of the United States, as it included the end of the revolution and events leading up to the creation of the Constitution and Bill of Rights. The great men leading these changes (George Washington, John Adams, Thomas Jefferson, James Madison and Alexander Hamilton) wanted to create a national identity that would unify the citizens. They looked to ancient Greece and Rome for inspiration for their government as well as their housing.

Going Beyond The Georgian Colonial

The Federalist style used the same symmetrical arrangement of windows around a center doorway, as was a cornerstone of the Georgian style. The front façade then was embellished with a semicircular fan style window and decorative crown molding over the door. The Federalist style typically included a low or flat pitched roof, decorative moldings and elegant ornamentation. The central entrance often was the centerpiece, set apart with a small, one story portico, a fan style window over the door and narrow sidelights.

Curves became a common architectural attribute during this time period. Architects and builders were moving away from the strict square and rectangular lines that define the Georgian period, and began adding curves. The change added some drama and helped distinguish this architectural time period.

The interior of many Federalist style homes also showcased grand architectural design. Many homes included recessed wall arches that provided a perfect backdrop for displaying fine art. Circular windows were placed in a distinctive area to focus attention there and provide a contrast against a section of square or rectangular windows. Oval rooms also were introduced, casting aside the notion that rooms had to be square and arranged around a central hallway.

While the Federalist style was widely popular through the mid-1800s, it never faded completely. Many of today's stately homes were inspired by the Federalist era. They often are made of brick and feature a rounded room or two, along with a gracious and detailed entryway and intricate moldings.

The same Palladian, circular and elliptical windows that helped define this style are prevalent in many homes built during the past 20 years.

When renovating a Federalist style home, it is important to understand what makes this architecture unique. Among the common elements are:

The windows also play a big role in defining this housing style. Look for new windows that carry the Palladian or circular style through to the new space. The continuity will help blend the new with the old and keep this interesting architectural style alive.