Homes and commercial buildings in Italianate style were built throughout the country.In New England, they often were homes to ship's captains. One fine example of such a houseis the Southard House in Richmond, Maine.

The Historic American Building Survey describes the mansion, built in 1855 by prominentRichmond shipbuilder Thomas J. Southard, as "designed in the manner of thePhiladelphia architect Samuel Sloan...(with) heavily bracketed cupola and broadlyoverhanging eaves, 2 stories high, rectangular with a hipped roof, tall cupola and one anda half story el on the east side."

Inside, the home is was grand as the outside. When the house was documented for theHABS in 1971, many of the original features were still present, despite the buildings usefor many years as a nursing home. 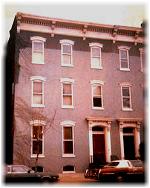 Many Italianates were much more modest than theSouthard House, of course. Elements of the style were also widely used in commercial brickbuildings at the time.