One of the defining characteristics of an old house is its molding. Long before subdivisions and factory-built houses, craftsmen toiled away carving intricate designs from thick, old growth lumber. Here's a look at period-style molding that often frames door openings or anchors ceilings and baseboards. 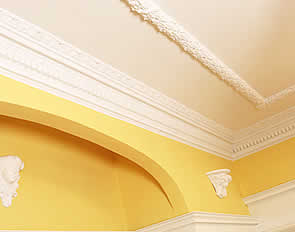 The period styles that were popular from the mid-1700s to the beginning of the twentieth century showcased a wide variety of ornate molding. Styles were often highly decorative and took the shape of ten-inch baseboards, seven-inch crown molding stacked into three sections, or symmetrical dentil molding topping a doorframe.

The Federalist period (1780-1815) built homes characterized by grand, brick homes with windows arranged symmetrically around a central doorway. Geometry played a big role in housing details, as circular and elliptical windows were built to enhance doorways.

Interior and exterior doorways were also framed with arches that drew attention upward to the fancy crown molding anchoring rooms. The molding ranged from elegant dentil molding to more decorative swag and garland molding on the ceiling or walls. Dining rooms, sitting rooms, and full-scale ballrooms soon took on a look suitable for visiting royalty.

While that level of grandeur is difficult to build into today's homes, there are ways to remodel and incorporate the Federalist style in smaller doses. In a newer home with Federalist leanings, one can add crown, baseboard, and door molding that imitates the original woodwork.

If you want one extravagant room, select a formal dining or living room where the look can be integrated successfully. As with any molding, talk with your contractor or architect about coordinating the look with adjacent rooms.

If the Federalist style is too ornate for your taste, consider the more subdued Georgian colonial. Popular during the 1700s, Georgian homes are characterized by the same square, symmetrical lines as the Federalist but without the swags, curves, and show.

Abundant ornamentation also decorated the Victorian era (1837-1901) and its molding, often with more delicate and fussy overtones. In the Queen Anne Victorian's trademark wraparound porch, the detailed molding that hangs over the roofline often set the tone for the interior's crown and ceiling molding.

Decorative accents, such as circular rosettes with intricate carvings, allow many moldings to anchor the corner of door or sections of fireplace. There are also ways to remodel the ornamentation surrounding a Victorian fireplace. Be sure to ask your contractor when remodeling.

While ceilings and baseboards often get the most attention, interior doorframes are a perfect opportunity to showcase fine workmanship. Many homes built through the 1700s to early 1900s feature wide door casings with round edges or two grooved layers framing the outside.

Tall plinth blocks often anchor the bottom of each side of the doorframe molding. Many have a few curved details to add some ornamentation. Corner blocks with raised circular patterns also draw attention to the woodwork.

If you're fortunate enough to have a home with this type of door molding, it is worth the effort to restore the wood to its original grandeur. This might mean stripping off layers of old paint and restaining the wood. If this is the case, be cautious of lead paint.

If your home has thinner door casing, it might not be practical to do major remodeling in order to add wider ones. Consider turning to taller baseboards and decorative crown moldings as focal points.

Chair rails and picture frame wall molding also were popular during this time, particularly in dining rooms and other formal spaces. Wood was often stained dark colors to blend with the dark Victorian furniture.

Molding After the Victorian Period

The period styles that followed the Victorian period - the farmhouse, arts and crafts, and mission style - feature moldings with less fuss. The crown molding in an arts and crafts home might have three layers and be four inches tall, but will not have scrolling and rope details.

This shift in style was due to changes in society that moved people away from the intricate designs of the Victorian era to more practical houses. The molding used after 1900 still has tremendous allure and elegance; it just exudes a quite charm instead of the grandeur of eras gone by.