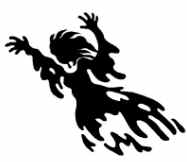 A week or so later I was working in the front yard. A little old lady came scuffling by. She stopped, looked around her suspiciously, and said in a conspiratorial tone, "Have you seen the ghost?"

The old lady whispered "His name is Sam. I seen him. He is E.'s. (the deceased former owner) uncle and she used to talk to him. He hangs out in the hallway." That was all I could get out of her as she scurried away. I never saw Uncle Sam myself, nor did anyone else while I lived in the house, so I think maybe he left when E. died.

A couple months later I was at a little porch-party at my next door neighbor's. We were talking about my house and I asked, jovially, "So, have you heard any ghost stories?" She stared at me and said, "Let me get another beer, and I'll tell you."

It seems when the house was up for sale, both she and her teenage daughter had gone in the house at different times. Both of them felt uneasy in the house, and when they entered the yellow bedroom they were overwhelmed with a nauseous feeling. They also claimed to see lights upstairs going off and on at inexplicable times when the house was vacant.

About the same time, I asked another neighbor about ghosts. He told me that during the three-year term the house was vacant, they owners had tried to rent it a couple of times, but gave up because they couldn't keep tenants. According to the neighbor, some of the tenants left in the middle of the night after "hearing and seeing strange things."  He didn't know any more than that!

Now, as for me, I never noticed a whole lot as far as "bad vibes." The yellow bedroom was not a comfortable place, but didn't make me sick or anything. I learned later that in the 1930s a man had been sick for a long time and had died in there. My neighbor, who got the bad feeling when she visited the room, recommended I paint it blue. So I did. She pronounced the bad vibe much decreased with the new coat of paint.

And when I was painting another room, I once felt a disapproving presence. The room had been pale blue and I was painting it gray. I said, "Hey, I'm fixing your house to keep if from falling apart! It will look nice!" The presence retreated. In the same room, at another time, I woke up in the middle of the night to see two human-shaped forms, one tall and one short, at the foot of my bed! I told them to go away and I never saw them again.

Probably the most interesting incident occurred when I was renting out another bedroom to a college student. One morning he came downstairs looking subdued and strange. His girlfriend had spent the prior night with him. He said that in the middle of the night, he woke up feeling there was an older lady in the room who was very, very disapproving . She approached the bed and touched him, then went "through" him to the downstairs room below. He found another apartment about a month later. I related this incident to someone who had known E. while she was alive. They said that the room the student was in had been her bedroom, and that yes, she would have taken a very dim view of his activities!

And finally, there was some kind of "critter" in our walk-in attic. Just an odd, nasty little presence in the corner that different people would sense. I don't know what it was.

When my husband moved into the house, all activity and strange vibes seemed to cease. Hubby thinks the ghosts liked me and left when they saw I had him to take care of me. The man who sold me the house (E'.s nephew) said when he saw me he knew I was the right person for it because I looked a lot like E. and her mother. So who knows? Maybe the ghosts were there, were nice to me because I was the "right person", and left for the reasons my husband gave.

I sort of wish they were still around!