The Prairie Style house is largely credited to Frank Lloyd Wright, one of Americas most innovative and famous architects.

Wright's goal in designing this radical new form of architecture, according to the book, The Prairie School Tradition, was to create organic architecture. Houses, Wright believed, had to be an integration of structural and aesthetic beauty and above all a sensitivity to human life. 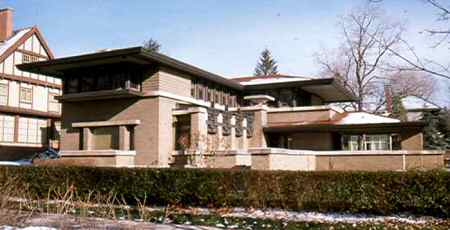 Wright worked with and was mentored by Louis H. Sullivan until 1893, when he left Sullivan's employ to open his own architectural firm. Sullivan worked as a Chicago architect immediately after the Great Fire of 1871 and was ultimately more well known as a teacher and philosopher. Sullivan's most frequently quoted statement (and quintessential philosophy) was, "Is there anything that does not reside in function and form? Not that Ive been able to discover."

Wright was the first of Sullivan's students to move toward a new form of architecture -- a style whose gently sloping roofs and low proportions fit with the quiet beauty of the prairie.

The term Prairie Style may have come from a contemporary architect of that era, Irving K. Pond who said the new style echo[ed] the spirit of the prairies of the great Middle West

Strong horizontal lines defined the Prairie Style. Other features included one-story projections, belt-courses between the storeys and oversized eaves which appear to spread out and hug the ground. The open interiors, rows of small windows and art glass, coupled with the low-pitched roof create a warm, informal and inviting space that looked right at home on the wide-open spaces of the prairie. These homes blended in with and were intimately connected to the landscape.

Unlike the ostentatious Victorian house, the Prairie Style house was conspicuously lacking in ornamentation. A variety of geometric shapes and forms inspired by nature were highlighted through window arrangement, columns, low walls and planters, creating a visually appealing home.

Most of Wright's designs use a centrally located fireplace to divide the living room, dining room and entry.

It was a distinctively Midwestern house, with most (but not all) examples found in that region. The Prairie Style began in 1900 and peaked around 1915. After World War I, the pendulum of architectural tastes swung back to old favorites and revival styles became popular.

Characteristics of the Prairie Style home