The Queen Anne style, rich and varied in ornamentation and form, was wildlypopular after its introduction in America at the 1876 Exposition in Philadelphia. Taking its name from the reign of an eighteenth century English Queen, the style was brought to America by the British government, which displayed several of the houses at the exposition.

If any one phrase can describe the elaborate style it's "the more fanciful, the better."

Queen Anne style houses are composed of a number of parts, including towers,dormers, bay windows, and corbelled chimneys. Wall surfaces such as coursed shingles, clapboards, and inset panels of sawn wooden ornament are combined with irregular roof lines and decorative wrap-around porches. Windows may includesmall square or diamond panes, and the more typically 2/2 double-hung sash.

Closely related is the Queen Anne Farmhouse, which has the basic form and simplicity of the Vernacular Farmhouse, but with the addition of Queen Anne exterior elements. Typically 1 1/2-stories, this style uses Queen Anne ornamentation in an understated and less complex manner. Decorative woodwork isnot as elaborate and used less frequently, but includes a combination of shingles and clapboards on wall surfaces, and sawn or turned woodwork on porches.

Queen Anne style houses were built throughout thecountry from roughly 1890 to 1910. The style caught on quickly, in part because woodworking mills could mass-produce turned porch posts, mouldings and other trimmings.

From an 1885 book, "Exterior Decoration," F.W. Devoe & Company,the style is lauded for its "opportunity for the greatest display of tastein coloring and exterior decoration."

The highly decorative style was soon nicknamed "bric-a-brack" and"gingerbread" for the elaborate and plentiful trim applied to nearl yevery exterior surface. In later years, white paint or false siding often masked the fanciful woodwork, but in their heyday, it was not uncommon for Queen Anne houses to be painted originally with five or six different colors to bring outall the different textures and trim. 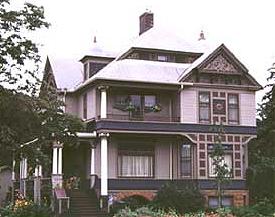 The Queen Anne fervor even reached the military. The Presidio in San Francisco, which served as a U.S. military post until 1994, is now a National Historic Landmark District, with 473 historic buildings ranging fromelegant officers' quarters to air hangars.

Queen Annes were eclectic, often asymmetrical with wrap-around porches,turrets, angled roof brackets, and different combinations and applications ofexterior building materials. The cluster of large officers' quarters located at Funston and Presidio Boulevards represent the Presidio's version of the Queen Anne style with a cleaner, less ornate building than the colorful, civilian counterparts found throughout the City of San Francisco.