The Old House Web has been following the adventures of Steve and CorbyCiccarelli and their three children as they restore an 1894 Queen Anne house. Thefamily has been willing to share their triumphs and setbacks on the Web. Theyare now a year and a half into the project. Here are some of the highlights. 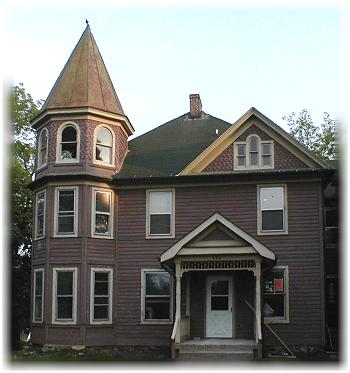 The house, May 2000. An enormous amount of work has been done inside andoutside, including gutting three apartments to restore the house to a singlefamily residence, regrading around the foundation and repointing the stones, newheating and air conditioning, repairs to insect damaged beams and joists,stripping woodwork, refinishing the floors, rewiring and replastering. Theoriginal chimney was replaced after a mason destroyed the original chimney in anattempt to line and repoint it. Siding is original and displays the varied useof materials and textures characteristic of Queen Anne houses. And, of course,the tower is a classic Queen Anne feature, as are the two over two windows. Theoriginal wrap-around porch is gone, but the small entry way has Queen Anne stylewoodwork.