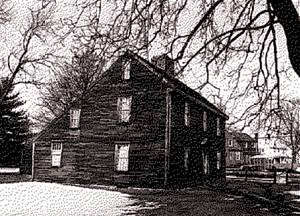 The birthplace and boyhood home ofJohn Adams, second president of the United States, was a saltbox built in 1650,and modified in 1720. The shed addition of the two-story home covers half of thenorth (rear wall). The home, initially one room deep, features a center chimney.The house is part of a National Historic Park located in Quincy, Massachusetts.

More a building shape than a building style, the saltbox takes its name froma sloping gable roof that gives the house the shape of a wooden box used tostore salt in Colonial times, like the reproduction of a 1770s saltbox by Replitiques.

The saltbox house is formed by a one-story addition across the rear of a 1-1/2 or2-story building. Initially an easy method of enlarging a house, it eventuallybecame an accepted building form, particularly in New England after 1680. Thestyle was common in New England before 1830, and it remained popular in otherparts of the country until the late 1800s.

The prominent center chimney or a pair of end chimneys alsodefine this style. Materials were simple and functional inside and out. Acenter entrance with a transom above and 4/4 or 6/6 double-hung windows arecommon features. 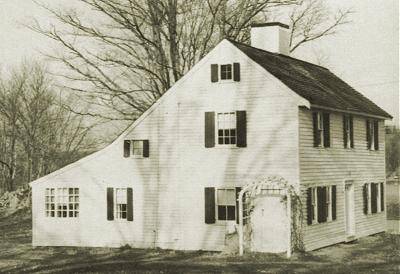 A house with a low roof line would not have the height for auseable ceiling in a rear addition. Similarly, the slope of the roof of atwo-story house might not be flat enough to cover a large, one-storyaddition. Thus it became common practice to change the roof line where theshed meets the main house to provide adequate ceiling space in the rearrooms.

In most saltboxes, the rear lean-to addition was divided into three rooms: Acentral kitchen with fireplace and oven, a room reserved for childbirth andnursing the ill, and a pantry. 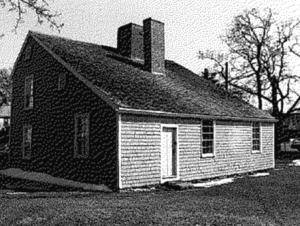 Another Adams saltbox, this one thebirthplace of John Adam's son, John Quincy Adams. Also part of the NationalHistoric Park, the house is 75 yards from the "old house." Thistwo-story saltbox features painted clapboard siding, 12 over 12 sash windows, astone foundation and a wood shingle roof. The lean-to chimney is clearly visibledirectly behind the house's center chimney. One of the best surviving examplesof a New England saltbox, the house has been restored to its 17th centuryappearance.

The insides of houses of this period were simple and practical,as well. The house below, in Saugus, Massachusetts, has been furnished as it would have beenfrom 1600 to 1700. This room depicts a bedchamber, definitely a luxury inColonial New England. More often, rooms had to serve multiple purposes. Note thelow, beamed ceiling and tiny panes of leaded glass in the windows. 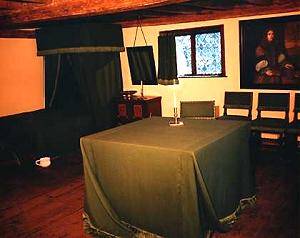