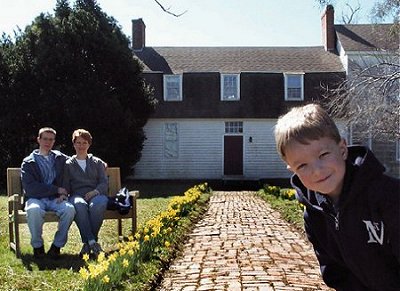 William Hathaway Chapman Jr. is all smiles in front of Enon Hall, the ancestral home returned once again to the Hathaway family. In the background are his parents, Bill and Gay Chapman.

Old house restoration is marked by "surprises" -- that rotted sill, insect infestation, or leaky roof you hadn't anticipated, despite the careful pre-closing inspection.

So what would possess a family to commit their energies and finances to the restoration of a 270-year-old home without ever setting foot in the place?

The answer, for 36-year-old Bill Chapman, lies in a dream he's had since he was seven years old. It was then that he caught his first glimpse of the Dutch Colonial, known as Enon Hall, in Virginia's Lancaster County. That glimpse of the rural estate was in a history book about the Hathaway Family. It would be 29 years later before Chapman would again see the outside of the house.

And he wouldn't see the inside until after he and his wife, Gay, had already committed a substantial portion of their life savings and closed on the purchase.

The Chapmans were willing to gamble in pursuit of a life-long quest to return the property to his family.

The land on which Enon Hall sits, on the tidal Antipoison Creek at the mouth of the Rappahannock River, had been in the Hathaway family for 275 years before it was sold outside the family in 1939. The only piece of property that remained in the family was a small, brick-walled family cemetery, which under Virginia law could not be sold.

"We decided that there was nothing we could possibly find that would deter us from wanting to proceed with the purchase...so why complicate things...or scare ourselves to death?" Bill says. "We could wait to see what we'd really gotten ourselves into with the house."

Bill says he told Gay some years back, "It's just something I have to do." Despite a love of the Victorian era, some 150 years after Enon Hall was built, Gay has been an ardent supporter of the project. She, Bill and their six-year-old son, spend many weekends working on the house.

At the same time, Bill has kept a careful journal of his purchase and restoration efforts. The journal serves partly as a family history, but also fosters genealogical research. Since going online a year ago, Bill has had contact with 14 previously unknown Hathaway descendants.