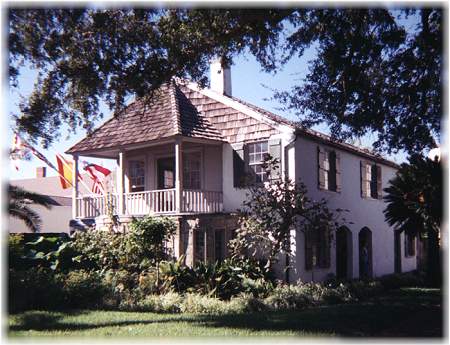 -- Ring Lardner, in his 1917 story, "Gullible's Travels," after a visit to St. Augustine, Florida

As a visitor to St. Augustine quickly learns, this northern Florida city is a place where "olde" sells.

"Olde" sells when stenciled onto a 99-cent tourist trinket. It sells when pasted onto a reproduction building. It even sells when emblazoned in lights in front of a 1990s hotel.

Yet despite the ticky-tack around the edges of the place, St. Augustine is a city with a fascinating history -- not to mention hundreds of old houses worth a closer look by anyone who appreciates such things.

It's also a city with scores of nice bed and breakfast inns, plenty of good restaurants and a climate that's hard to beat. And if all that weren't enough, just two miles east of town you'll find the Atlantic Ocean, with mile upon mile of beaches.

Add it all up and you've got a history-steeped city that's well worth a visit by afficiandos of history and old houses.

Further, St. Augustine is a vacation spot that will respect your travel budget -- no matter what it might be. Yes, there are plenty of $200-a-night bed and breakfasts, but there are also scores of $50-a-night motels on the edges of the city. Historical attractions are reasonably priced, too.

Finally, this is a compact, pedestrian-friendly city -- a place where you can park the car, put on a comfortable pair of walking shoes, and have a great day poking about.

More on what you'll want to take in a moment.

But first, a few more words about "olde."

So if you won't find the nation's oldest house in St. Augustine, what exactly will you find?

According to local writer and historian David Nolan, writing in his 1995 book "The Houses of St. Augustine," roughly three dozen buildings remain standing in the city from Colonial times -- a period that extends through 1821, when the American flag was first raised over St. Augustine.

During that early 250-year period from its founding, the city was part of a Spanish colony through 1763. It was ruled by the British starting in 1764 -- and a second time by the Spanish starting in 1784.

Its earliest houses were wood and Palm thatching -- and none survived the numerous raids, wars and burnings that are part of the city's early history.

Beginning in the early 18th century, a new building material came into use -- a native shellstone known as coquina. It is from this stone that the earliest remaining houses were built.

A variety of houses -- some elegant, some humble -- remain from the city's early days as an American colony and, starting in 1845, the Union's 27th state.

By the time the Civil War broke out, Victorian architecture had arrived. And then, starting about a century ago, tourists and well-to-do winter residents began discovering the place -- attracted by the arrival of the railroad, which provided easy transportation to Florida for the first time.

The city's most important patron during those late 19th century years was Henry Flagler, partner of John D. Rockefeller in the Standard Oil Company, and the man who brought railroads -- and early five-star resorts -- to St. Augustine and Florida cities further to the south.