The Georgian style of architecture played a dominant role in Great Britain and the American colonies during the 18th Century. Known for its red brick facade and white painted trim, the traditional Georgian style appealed to the upper class as well as the burgeoning middle class. 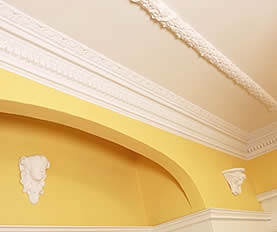 The Georgian style is defined by its symmetrical placement of doors, windows and other architectural elements. Roofs were built with low to medium pitches and did not catch your attention. When buying an old Georgian or a newer one that mimics the original style you can be assured of a classic design with a center entry door and, typically, a red brick facade.

While not nearly as ornate as the Baroque style that came before it, the Georgian style had a traditional, stately look that appealed to many people. White stone often accented the white painted trim, for example. The front facade typically includes five windows with divided panes. The placement of the front door in the middle of the facade helped create a traditional family style dwelling.

The Georgian style began in England during the early 1700s and evolved for a century as three King Georges (I, II and III) reigned. Architects were moving away from opulence of the Baroque style that defined many churches and public buildings in the early 1700s. That style featured heavy ornamentation, large ceiling frescoes and more dramatic facades and entryways.

As with many architectural styles, the Georgian has different variations, from the Palladian to the Georgian Colonial. Regardless of the style nuances, the Georgian style appealed to many people in the colonies and soon became part of the training of carpenters, masons and plasterers.

The Georgian in America

The Georgian style that was all the rage in England made its way to New England and the Southern American colonies during the 1700s. The homes being built were stately and classic, imitating the more elaborate British homes inspired by the Italian Renaissance and ancient Greek and Roman architecture.

The style emerged as a simpler style in the American colonies, however. Many Georgian buildings were built of wood with clapboards, for example, instead of brick. The columns used to flank the front entryway often were thinner and had fewer details. This shift was due in part to the cost and availability of materials. Also, many craftsmen who built Georgian homes in England stayed there to continue their trade.

One popular variation of the style is the Georgian Colonial. This style spread quickly through the colonies and took on different variations depending on the financial means of the colonists. The wealthy colonists could afford more detailing and finer materials. Those with smaller fortunes still liked the classic style, but had to make do with less costly materials and detailing.

Regional differences in Georgian architecture soon became evident. They were influenced by the nuances of each area and the availability of materials.

Among the details that define Georgian Colonial homes are:

The Georgian Colonial style later evolved into a "Federal" style, which has neo-Palladian influences. Those same Palladian style windows that were popular during this period still are used today -- to add style to many newer homes.

Among the areas to focus on are the doors and windows. Doors often had a filigree fanlight over the top, while original Georgian windows had sashes and shutters. The fireplace area also can be restored to help accentuate the Georgian details of the time. Fireplaces often were built as focal points in a living room or dining room. They featured decorative swags, urns and medallions on the front, and were often flanked by pillars.

Among the simpliest renovation projects is paint, which should take on burgundy, sage and blue gray tones to reflect that era.

Another option is to move toward softern tones, such as the Wedgewood blue or dusky pink that evolved later in the Georgian period. Most paint manufacturers have historic colors that can add some authenticity to the color scheme.

Among the other overall Georgian details are: