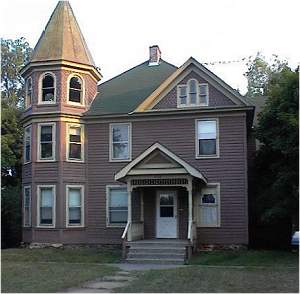 My wife and I tonight signed an offer letter on a turn-of-the-centuryVictorian home in central Loudoun County, Virginia.

Our existing house is 10 months old. It's large and nice -- but just notwhat we want out of life. We're hoping to sell it in favor of the dust, drafts and charmsof old-house living. And we plan to chronicle the whole process of restoration here on theOld House Web.

I'll go into as much gory detail as you all can stand:

By day, I'm a Unix / C++ programmer with America Online. During the nights andweekends, I enjoy working on my house. I'm not formally trained in the trades, but Ido enjoy projects, and have even done some on-the-side contract work for small to mediumjobs such as putting in kitchens and refinishing basements.

Designing and building decks and playsets are fairly straightforward for me -- andabout my usual ability level. I have a basic understanding of plumbing, electric and some of the more specialized trades but as a rule I don't touch those, leaving them to the experts. I simply don't have the experience that years of doing thework might provide.

So my role -- and that of my wife -- might best be described as part producer, partstagehand. We'll make the big decisions and provide manual labor on those portions of theproject for which we're qualified. But we won't hesitate to call in pros when we needthem.

As a wise man once said, "A man's gotta know his limitations..."

Credit my wife with the dream. Living in tract housing for the past decade and a halfheightened her desire to live in an authentic Victorian home. As for me, it took less workon her part than she might have imagined to persuade me to buy into her dream.

The faceless, convenant-shackled anonymity of suburbia -- where everyone has more orless the same floor plan -- just isn't my idea paradise.

One of the final pieces fell into place a few months back, after a neighborpainted his pressure treated board-on-board fence. The fence was already one of theprettiest in the neighborhood. With a fresh coat of white paint, it was nowspectacular. Alas, our neighborhood's convenants specifically prohibited anything but barewood pressure treated fences.

And wouldn't you know it: One of the other homeowners complained! How can you make ahouse your home if you can't even paint your fence? My wife had an answer. And herunorthodox solution slowly grew on me. She yearned for old-house living, small-town living.

And as luck would have it, just such a home was already on the market, within easycommuting distance of both of our jobs, and nestled in a small town with good schools andwonderful surroundings. At that point, the decision almost made itself.

Our intentions in rebuilding the home are best described as 'modernized authentic.'We'll correct obvious deficiencies in the construction, such as adding fireblocks in thewalls.

We'll provide ourselves with modern conveniences, masking their appearance wherepossible. For example, as we work on the house, we'll add in-wall wiring for a network forthe computers, wiring for an alarm system and plumbing for heat-activated sprinklers.We'll also install small-diameter, unobtrusive central air conditioning. Our goal is tomake such things difficult to spot.

Wherever possible or practical, we'll maintain original trim and use originalconstruction methods, materials and designs. This will include reconstruction of thewraparound porch -- and possibly sleeping porches. It will include reinstallation ofwindows removed in 1973 when the house we're buying was converted into a four-unitapartment building.

I hope you all can can follow along. Our current time frame for taking possession ofour 'new' Victorian house is around or about mid-November, with renovations starting veryshortly after that.