Note: Bill and Gay Chapman have purchased Bill'sancestral home, Enon Hall, a four-acre estate near the Chesapeake Bay inLancaster County, Virginia. Since 1999, Bill has kept a careful journal or hispurchase and restoration of Enon Hall. This story is built from journal excerptson discovering and rebuilding a back porch.

Once all of the shingles were off and bagged I turned my attention to theoutside walls of the shed addition. (See photo above.) This addition started its life as a screenedporch that was later closed in, using any piece of wood that happened to belying around. I removed the screen frames and Gay came out to help me wrestledown the three louvered windows.

By 3:30 in the afternoon I was covered with grime from the dirty process. Istood in the middle of the destruction gulping Gatorade and looking around whenit hit me. "Holy cow! This is the front porch!" There in front of mewere the same 4 tapered posts that are so clearly visible in photosof Enon Hall from the early 1900s! Only then, they supported the frontporch!

So this shed addition didn't start life as a screened porch...it actuallystarted life as a simple open porch...and it actually started that life on thefront of the house! From what I can tell from photos, it probably was torn offof the front and rebuilt on the back sometime in the 1930s. Standing out in theback yard I could see the true effect of what I had accomplished today. The backof the house, always its scariest side, looked 500% better. The porch ischarming and Gay and I decided immediately that we would have to keep it!

But, of course, it's not all that easy. The floor is rotted beyond repair andwill need to be totally replaced. Meanwhile, the roof needs to be supported onbraces so that this work can be done. But we're anxious to tackle this projectin order to preserve this porch. 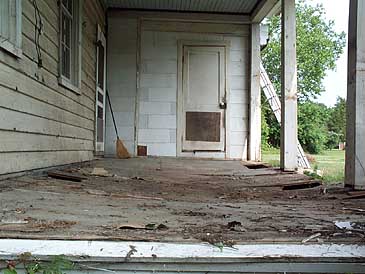 On Saturday, my brother and I tore down the concrete block chimney by the oldback porch to make way for the construction of a new porch floor. The topthree-quarters of the chimney came down easily with just a rope tied high andthe two of us pulling. Then I easily broke up the rest with a sledge hammer. 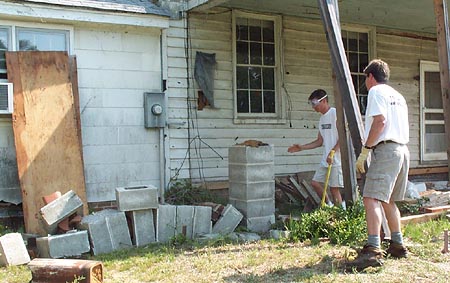 Once the chimney was down, we started framing the new porchfloor with salt-treated lumber. Used joist hangers for the first time. Once wegot the hang of them they really sped the job and made nailing easier. 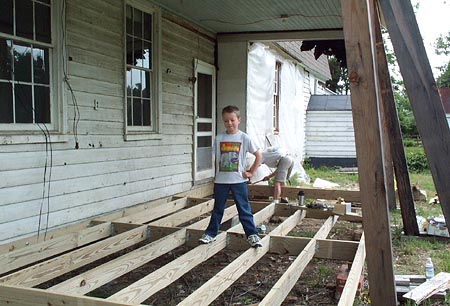 Spent the day priming the bottoms, sides, and ends of about 80 tongue andgroove floorboards for the porch. Slow, boring work; but hopefully it will helpto deter rot for years to come. 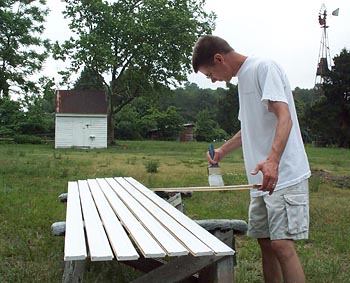 Spent a long weekend at Enon Hall trying to work on the porch betweentorrential rain showers. On Friday my brother and I used a floor nailer toinstall the tongue and groove pine flooring. Here's a tip: It's easy to notnotice that the nailer has run out of nails. Even when empty, it leaves a divot in the tongue that looks like a nicely sunk nail head. Turns out we missedseveral boards and when a downpour came that night...well, the picture belowshows the unpleasant surprise I found Saturday morning.

Continued to pour all Saturday. Was able to replace the buckled boards onSunday, install the fascia, and get everything primed. At 2:30 the next morning Iwas up throwing drop clothes over everything as yet another thunderstorm rolledthrough. 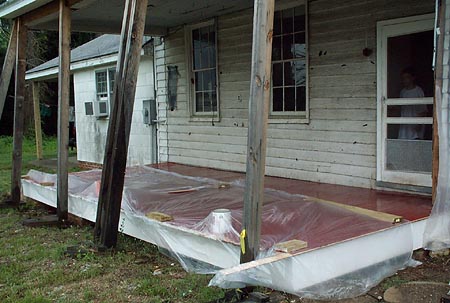 Put another coat of floor enamel on the porch floor. Thenreinstalled two of the original solid tapered posts. We put the remaining postsin place on the porch and I started the trim work. Gay got me an early Father'sDay present with these two great rockers! We really love this porch already. Sonice to open the door and be able to step out on "something." And alsogreat to see the old posts back in place.

Note: The Old House Web has been following the restoration ofEnon Hall. For more stories in this series, followthis link. And if you check onto the Enon Hall Website, you'll see that neither Bill nor Gay (or even young William) Chapmanhave spent much time sitting and rocking on their porch. Belowis a picture of the front of the house, sporting its new yellow color, chosenafter research showed that the house had been painted yellow long ago.