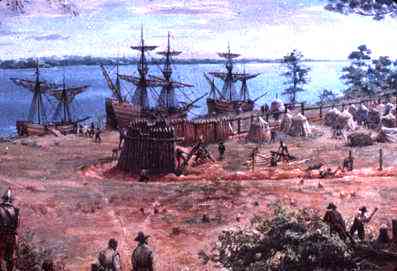 On May 13, 1607, three ships, the Susan Constant, the Godspeed,and the Discovery disembarked 104 English colonists upon the shores of asmall peninsula jutting into the river. It seemed an ideal place. Thirty-sixmiles inland from the Chesapeake Bay, it would escape notice of Spanish shipsalong the coast. It was easily defended against attack and provided a good deepharbor for the ships.

The settlers named the river James and the settlement Jamestown after theirsovereign King, James I.

This settlement would become the first permanent English Colony in NorthAmerica, the first capital of Virginia and the site of the first Englishrepresentative government in America. It would be the social and politicalcenter of the Virginia colony for more than 92 years.

But before permanency was assured the colonists would suffer trials,hardships and tribulations unimaginable at the time. Disease, hunger, internalsquabbling and conflicts with the native population would take their toll. Ofthose first 104 adventurers only 38 survived to the next spring. It would takeseveral more cruel years before this new colony had established a strong enoughfoundation to ensure permanency.

Thanksgiving at Jamestown and at Plymouth 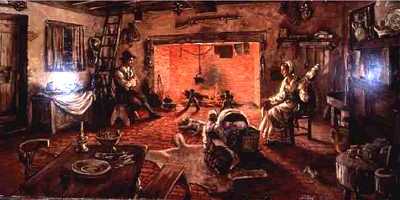 This Sidney King painting, "TheHome Scene," circa 1650, portrays a Colonial household at Jamestown.

On December 4, 1619 settlers stepped ashore at Berkeley Hundredalong the James River and, in accordance with the proprietor's instruction that"the day of our ship's arrival ... shall be yearly and perpetually kept asa day of thanksgiving," celebrated the first official Thanksgiving Day.

Thirteen years later after the 1607 Jamestown landing, 102 settlers aboardthe Mayflower landed in Massachusetts at a place they named Plymouth. With thesetwo colonies, English settlement in North America was born. In the fall of 1621,the Pilgrims held a celebration to give thanks to God for his bounty andblessings. This occasion was the origin of the traditional Thanksgiving as weknow it today.