Despite numerous variations, American Queen Anne style houses share characteristics that should be preserved, if possible. These include bay windows, turrets, wrap-around porches, classic columns, spindle work, and slate roofs. But each American style also includes specific design characteristics that are important to consider before starting any sort of restoration project, particularly on turrets and bay windows (both of which may be integral to the design). The three main American styles are Stick, Eastlake, and Shingle. 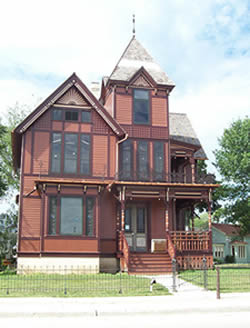 The Eastlake style of Queen Anne architecture was named after Charles Eastlake, an English author whose ideas about design influenced American home builders. Eastlake Queen Anne homes are generally smaller in size than Stick or Shingle Queen Annes, and they traditionally have more ornamentation and detail, specifically:

In the Eastlake style, turrets and bay windows may be simple and angular (as in the Stick style) or more ornate and curved, as in more traditional Queen Anne styles, such as the Shingle. 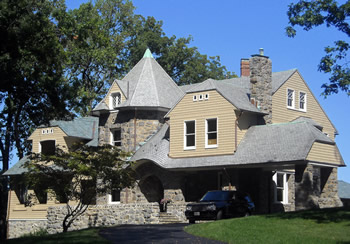 Perhaps the most striking characteristic of the Shingle Style of Queen Anne homes are, of course, the shingles covering the home. In fact, this style is the same as the other Queen Annes, except for the shingle wrapping. As with the other two styles, Shingle homes have wide porches, asymmetrical forms, turrets, and bay windows, but also possess unique design characteristics:

Regardless of which Queen Anne style you own or are looking to restore, it is important to know their differences and to choose your materials accordingly to maintain the historical integrity of the home.