Walk through many established neighborhoods and you'll find a few Tudor styled homes. This classic style, with the high-pitched roof and commanding masonry exterior, exudes an enduring appeal that transcends modern architectural shifts. 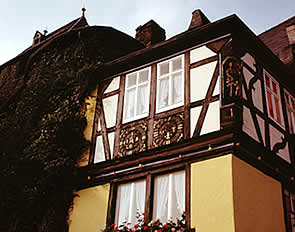 The Tudor housing style finds its roots in the elaborate palaces of England. Hampton Court Palace, which housed many monarchs throughout history, is one of the finest examples of Tudor architecture. The palace was built during the 1200s and, despite changing hands several times and undergoing massive renovations, endures as one of the most important Tudor palaces in England.

The Tudor period in England ran from about 1500 to 1575 and saw a major shift in architectural style from the Gothic period. While the homes retained many Gothic attributes, the focus moved away from large religious buildings to more intimate homes with plenty of architectural details.

The pointed arches of the Gothic period were softened to become rounded arches that defined doorways, for example. Leaded and stained glass windows were common. The oriel window, a multi-sided structure that jutted out from an upper floor and was supported by a bracket or corbel, became popular.

Tudor Architecture in the United States

In the United States, the Tudor style became popular during the 1920s and 30s, then saw another resurgence during the 1970s and 80s. As with many housing styles, the first Tudors were built by the wealthy upper class. Once the style filtered down to the masses, it gained wider appeal and flourished in many middle class neighborhoods.

Tudor homes borrow many of their characteristics from the late medieval English homes. The massive chimneys with decorative ornamentation and steep, gabled roofs help create imposing structures that project tradition and quality.

There are three main subsets of the Tudor style. The traditional Tudor features a brick or stucco façade, while the Elizabethan version is more informal. It features half-timbered exteriors and a more relaxed look. The Jacobean Tudor is a mixture of English and Dutch styling, with shaped gables and parapets, which are sections of the roof gables that extend above the roofline.

Details of the Tudor Style

The Tudor style can be identified by several common characteristics. The homes typically have two or more stories and an impressive brick exterior. An arched opening often covers the main entryway, along with a few interior room openings. On the outside, the entryway may be framed with interesting brick detailing that defines the space and accentuates the arch.

Once you've looked at the sturdy brick façade and steep roofline of a Tudor, your eyes will invariably fall to the windows. Classic Tudor homes often include tall, narrow windows and more dramatic oriel windows that project out from the façade in a rounded or curved shape.

The window panes themselves also are noteworthy, as they often contain leaded or stained glass. Craftsmen working on Tudors after the turn of the century took great pride in their ability to create unique geometric shapes and leaded designs. The windows prompted admiration from many visitors and created interesting light patterns throughout the house.

The distinct styling found in many Tudors makes home renovation a fun yet challenging experience. The tricky part comes when adding on space, as it can be difficult and costly to imitate the craftsmanship that was common 100 years ago.

One important component of such a renovation is the architect. You'll want to find one who specializes in older homes and has some history with the Tudor architectural style. A good architect can help you blend any new or remodeled spaces with the original architecture. The same arched doorway openings, for example, can be carried through to a new sunroom or family room. There also are many craftspeople who can replicate old Tudor windows to help blend new spaces with the old.

Another way to retain the architectural integrity of the home is to reuse materials that otherwise would stand in the way of your renovations. A stained glass window in the kitchen may be removed to make way for more wall cabinets, for example. Instead of burying the window in your attic, find a way to display it in the new kitchen or another prominent place.

The Tudor home is a strong and vibrant reminder of great English architecture. Whether you live in a historic Tudor or a newer version that imitates the grandeur of days gone by, the distinct style will set your house apart from the crowd.

Allison E. Beatty is an avid old house enthusiast who has been renovating houses and writing about them for more than 10 years. She contributes regularly to national newspaper, magazines and web sites. She lives in an 1888 Victorian era home.