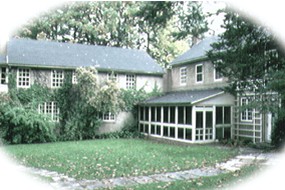 Like Val-Kill itself, Eleanor Roosevelt's description ofthe her home is modest. Yet the humble Dutch Colonial was priceless to the FirstLady. The small fieldstone cottage was a comfortable and private place to comehome to -- a refuge from a very public life.

Sitting in the shadows of the Roosevelts' Hyde Park mansion in New York,Val-Kill was the only home that ever belonged to Mrs. Roosevelt. The only National Historic Sitededicated to a First Lady, the home welcomes visitors as the FirstLady would have in the 1930s. 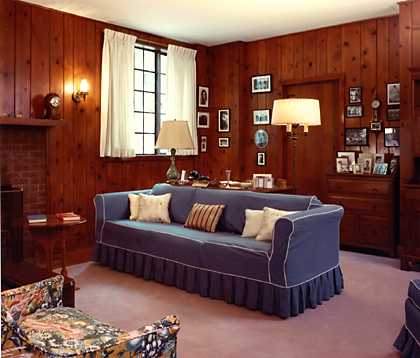 Despite a steady procession offamily and guests, Val-Kill remained Eleanor Roosevelt's sanctuary.It was the one place where she could relax or work uninterrupted late into thenight. Shown here is the living room.

Having spent most of her girlhood in her grandmother's mansion at Tivoli,NewYork, Eleanor married at age 20 and discovered that along with her husband camehis doting mother, Sara Delano Roosevelt. The grande dame of Hyde Parkaccompanied the young couple almost everywhere they went during their firstyears of marriage -- a New York City townhouse she built and decorated for them;the family vacation house at Campobello, New Brunswick; and the venerableRoosevelt manor house on the banks of the Hudson River.

Sara expected to have the lastword in household matters, and the young wife, wanting to please her husband'sfamily, usually allowed her mother-in-law to rule.

Franklin's election to the New York State Senate in 1910 and his appointmentas Assistant Secretary of the Navy in 1913 took them to new places. Sara spentlittle time with her son in Albany and Washington since she disapproved of hispublic career. Eleanor now found her house full of Franklin's political cronies.

Eventually, through her work in the Democratic party, Eleanor began to acquirepolitical associates of her own. New York Democratic Committee coworkers NancyCook and Marion Dickerman became her closest friends. 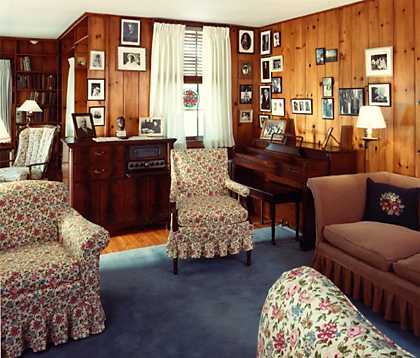 A quiet place to reflect...Eleanor'sstudy at Val-Kill

The idea for Val-Kill emerged in August 1924. Eleanor invited Nan and Marionto join her family at their favorite picnic spot by a stream, Fall Kill, on theRoosevelt estate. Listening to his wife's lament that Sara was closing the bighouse for the year, making this the last outing of the season, Franklinsuggested that the three friends build a cottage nearby where they could enjoythe place year-round.

The women enthusiastically accepted his offer of severalacres of land for their lifetime use. Franklin himself helped architect HenryToombs design the structure in Dutch Colonial style. By 1925 a small fieldstonehouse stood on the site, christened Val-Kill after the nearby stream.

Nan and Marion moved into the cottage immediately, making it their permanentresidence until 1947. Eleanor joined them on weekends and holidays and duringthe summer.

In the comfortable wood-paneled living, Eleanor at last had a place free fromher mother-in-law domination -- a home to entertain friends, or to be alone ifshe chose.

In 1926 the women constructed a second, larger building on the site tohouse Val-Kill Industries, an experimental business they started with mutualfriend Caroline O'Day. The four women were saddened by the exodus of rural NewYorkers to the large cities in search of jobs. The industry's founders believedthat if these farm workers learned manufacturing skills in addition toagriculture, they would have a source of income when farming was unprofitable.For 10 years local men and women turned out replicas of Early Americanfurniture, pewter pieces, and weavings. Although Val-Kill's products were ofhigh quality, the operation folded in 1936, a victim of theGreat Depression.

Instead of closing down the factory building, Eleanor, by now FirstLady, converted it into two apartments for herself and her secretary Malvina"Tommy" Thompson, with several guest rooms to handle the overflow fromthe big house.

During the hectic Roosevelt presidential years, Hyde Park was awelcome refuge for Franklin from unceasing activity in Washington, as well as aquiet place for Eleanor to rest after her whirlwind trips around the country.

When Franklin could not accompany her to Hyde Park, Eleanor spent her visits atVal-Kill rather than in the imposing mansion.

Foreign heads of state who visited the president usually spent time at HydePark. After visiting the Roosevelt home, dignitaries such as Winston Churchilland Queen Wilhelmina of the Netherlands dined beside the outdoor fireplace atVal-Kill.

Eleanor continued this tradition of informal gatherings outside hercottage long after Franklin died. As specified by his will, she turned the bighouse over to the U.S. Government but kept the Val-Kill complex for herself,living in the converted furniture factory, which she renamed Val-Kill Cottage,for 17 more years.

In this placid setting she received some of the most important world leadersof the time. Nikita Khrushchev, Marshal Tito, Haile Selassie, and JawaharlalNehru all came to Hyde Park to see Franklin Roosevelt's grave and pay theirrespects to his widow. To Eleanor, these visits were opportunities for her todiscuss humanitarian issues candidly with influential men. She was also hostessto Adlai Stevenson, a frequent visitor, labor leader Walter Reuther, and John F.Kennedy, who sought her blessings for his 1960 presidential campaign.

There were other guests who were less famous but no less welcome. Each summershe entertained more than 150 youngsters from the local Wiltwyck School fordelinquent boys. She put on an all-American picnic. The children ate hot dogsand played games, and afterwards Eleanor read to them from Kipling. Eleanor'sfamily and personal friends often stayed at Val-Kill; she delighted in planninglarge holiday celebrations for loved ones.

After Eleanor died in 1962, her house was made over into four rental units.In 1970 the property was sold to private developers who planned to build on theland. Worried that the development would damage a valuable historic asset,concerned citizens organized a drive to preserve the site, which in turn sparkedinterest in establishing a national memorial. In May 1977 President Jimmy Cartersigned the bill creating the Eleanor Roosevelt National Historic Site, "inorder to commemorate for the education, inspiration, and benefit of present andfuture generations the life and work of an outstanding woman in Americanhistory."