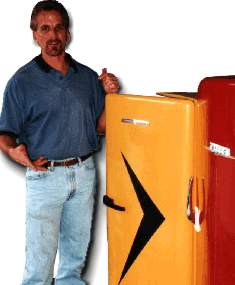 Customers are willing to forgo modern conveniences for thedistinctive, soft and rounded look that defined appliances until about 1957,saysJohn Jowers, affable owner of the Clayton, Georgia, appliance store his fatherfounded.

Jowers will sell about 60 restored vintage appliances this year -- asmany as his crew of five can handle -- but barely enough to keep up with demand.Jowers' customers sometimes wait six months or longer for one of the 1920s to1950s appliances.

The pieces sell for $2,500 to $6,000 and are used anywhere from kitchens to museums to familyrecreation rooms.

"People spending money on a vintage kitchen have just got to have an old appliance to complete it," Jowers says.Insome cases the older appliance becomes an accent piece with a modern appliancedoing every day duty. But Jowers says many customers give up the convenience ofautomatic defrosting and self-cleaning and use the restored refrigerators andstoves as their primary appliances. 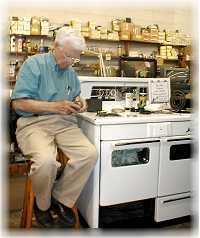 Jowers recalls his father's reaction when he began restoring old appliances:"No one's going to want that old stuff."Six years later, he'sbecome "quiteinterested in the business," his son says. In fact, the elder Jowers(pictured above, repairing a vintage stove) hasseen his son refurbish some appliances that he remembers selling the first timearound.

Jowers works strictly by commission, finding, restoring and shippingrefrigerators to customers all over the country. His customers find him largely through his Web site, where he posts pictures of finished projects as well astreasures waiting to be restored. The price of the restored appliances rival,and in many cases, exceed the price of a new high-end appliance.

But before you decide to cash in for big bucks on grandma's old Philco,consider the work that goes into refurbishing an old refrigerator.

The unit is completely disassembled, old insulation and wiring discarded. Thebox is stripped and gutted, with every piece meticulously catalogued,photographed and stored in a plastic bag. Interior rust is sanded, dents andbody damaged are repaired. The box is then coated with two coats of primer andfinished with a solvent-based enamel. If the appliance is old enough to beporcelain, it is sent out to be refinished and relined. Chrome racks arere-plated. Then the refrigerator gets new insulation, new coolant, new wiring and an overhaulof the mechanical system.

The simplest appliances require at least 50 hours of labor to restore, withsome more elaborate models taking up to 110 hours.

Jowers pays an average of $150 to $300 for the un-restored appliances.

The stoves and refrigerators Jowers refurbishes come from just about everyplace imaginable -- barns, garages, summer houses, through ads and solicitationson his Web site. Occasionally Jowers will do a road trip topick up a particularly nice piece.

One of his most interesting tales of acquisition involves a 1939 refrigerator. Theunfortunate appliance had been the object of a marital dispute which culminatedwhen the man of the house "drug the thing out to the middle of thefield," Jowers says. There it sat for eight years, rusting and sinking inthe mud. The husband died and the refrigerator languished in its undistinguishedresting place until Jowers came upon it. The widow, happy to have therefrigerator finally gone, gave it to Jowers.

Back at the shop, the refrigerator was fitted with a new electrical cord,plugged in and "ithummed right up," Jowers recalls.

All of Jower's appliances get new wiring and insulation and a completemechanical overhaul. Jowers says he prefers to re-use the old mechanical systems, which he says arestudier and quieter than new systems. Finally the appliance is tested. A rebuiltvintage refrigerator motor will run 8 to 12 minutes out of every hour --more efficient, he says, than many newer models. Some customers prefer a new mechanicalsystem for ease of maintenance and repair. Jowers uses standard mechanical parts that "anyrepairman, anywhere is going to know how to fix."

The coolant in the old refrigerators -- nearly always freon as far back as1937 -- must be replaced. But since freon was commonly used until 1992,its modern substitute, R12, is compatible with the vintage cooling systems.

Jowers says he hasn't encountered problems finding mechanical parts to repairhis appliances. "You can still find these parts in catalogs," he says."These machines were meant to be repaired. They were built in the days before plannedobsolescence."

In some ways, Jowers' business is a labor of love -- and he and his craftsmenare passionate about it. The same crew still helps run the modern appliance store,"but they're always after me to let them do more restoration," hesays. His craftsmen present a diverse portfolio, and include a formerMiami attorney, a painter, a former hotel and restaurant manager who now spendshis days building custom shipping crates and recreating any millwork needed forthe older appliances, and a retired seaman who redesigns electricalsystems for the appliances.

Like most of his crew, Jowers got into the antique appliance businesssomewhat by chance. As a fresh college graduate with a business degree,Jowers remembers vowing never to return to Clayton,let alone to the appliance business in which he grew up. His first job aftercollege convinced him that he would rather own a business than be an employee,and Jowers returned to his father's appliance store in 1980. In 1982, hebought the business from his father.

Several years ago, a couple of the store's employees asked if they couldrestore a 1940s refrigerator and put it in the display window as a drawing card.That little red refrigerator became the catalyst for Jowers Antique Appliances.

Customers and window shoppers alike inquired about the flashy little machine.One woman was particularly persistent, coming by weekly to ask about buying therefrigerator. The woman was redoing her basement and had two old pinballmachines and a jukebox. "She HAD to have that little red box." Jowerssays.

Jowers finally sold the little refrigerator, and his crewrestored another box for the window. That refrigerator sold nearly as soon as itwas placed on display. For the next few years, Jowers and his crewrestored and sold a half dozen old appliances, "pretty much for fun,"he says. The crew enjoyed doing the work, and it kept them busy during the quietwinter months in this resort town.

Two years ago, Jowers bought the domain name antiqueappliances.com andlaunched a Web site advertising his restored treasurers. Most of the vintagestoves and refrigerator now come via the Web site, which features photos,descriptions and prices. Jowers can ship the appliances most places in theUnited States, at a cost ranging from $300 to $800.

Through April of this year, the crew had completely refurbished 10 appliances,and had another 34 scheduled for work. Jowers estimates that he'll do perhaps 60in all this year.

1957 is the pivitol year for older appliances, Jowers says. "After that,they became boxier and more streamlined," he says. "I call it theGeorge Jetson look." He occasionally will work on a model as late as 1961, especiallyif it is pink or turquoise, or has unusual features such as a bottom freezer orlazy Susan shelves.

Does he think he'll ever be asked to redo a 1970s avocado green or harvestgold piece?