The Cape Cod is an iconic bit of American architecture, especially in its New England stronghold where you can still find houses from the 18th and even the 17th centuries. Drive any back road in the region and you're likely to find one of these white clapboarded beauties tucked beneath a big maple tree or overlooking fields and barns from a small knoll.

Compared to the grandiose excesses of so much modern architecture, they are startling in their simplicity and lack of pretense.

Capes are still being built by the tens of thousands, essentially unchanged from their colonial predecessors. But still, in the end, there is something unmistakable about an old Cape Cod that identifies it instantly as something from a different era.

I've often wondered what exactly makes the old ones stand out so clearly. After all, old and new share a common form. They are one-story designs with a gable roof, an entry in or near the center of one long side, simple trim, and shallow roof overhangs.

But you can spot a truly old Cape a quarter-mile away. 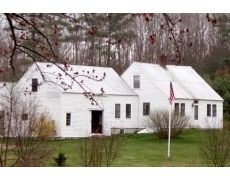 This is one near where I live in southern Maine. It's set back from the main road a bit, and even without the attached barn, the house to me clearly is old school. It is perfectly symmetrical, with two windows on each side of the front door, and a small chimney in the center of the house.

It has a sheet metal roof, although originally the roof would have been wood shingles. Window and door casings are plain, flat stock. There are no brackets, corbels, or other exterior flourishes, and the fascia along the front of the house and the eaves on the gable end is completely unadorned.

It would be tough to make a house much simpler than this. And yet it took a lot of skill to construct this house with nothing more than hand tools, and build it so well that it's still standing with a straight roof and level sills after a century and a half of service. Or thereabouts.

Any builder today should be able to mimic this simple design and turn out a house equally as balanced, just as pleasing in its proportions and lines. But somehow they can't seem to manage it.

Newer designs may get a front porch or covered entry. Then there are shutters, slightly larger roof overhangs, and possibly a few gabled dormers on the front of the house. Architects save their most flagrant violations for the back of the house, usually in the form of a full-width shed dormer. It gives the house a hunched up rear end, like a cat whose paws have just come into reluctant contact with water.

In the end, a lot of little changes transform what might have been a Cape into an almost Cape. Not necessarily a bad house, just not what it could have been.