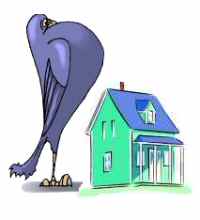 "We have no need to go to haunted houses when some of our houses are scarier," wrote one Old House Web bulletin board regular. "What was the scariest thing (large or gross project) that you had to tackle as an old house owner?"

Here are some of the responses:

Mine was the broken and bowed in basement wall that leaks at the floor wall joint. We had to jack up the house, dig the wall out, take the wall down and totally re-brick it.. in DECEMBER!

The roof that was over my very wet head. Three layers of asphalt shingles and one rotted layer of original cedar shakes (125+ yrs old) - and one long prayer for a very dry season last year.

After all the pointing and laughing from roofing companies, one agreed to take the job and sent the most foul-mouthed guys they had. You should have seen the retirees slamming shut their windows next door.

Five long, rainy days ensued - trouble. The angry bunch (all 8 of them) up on the roof regularly making jokes about termites, bees, infestations, etc. But unfortunately, they weren't joking when they advised that my new old house had once had an inferno in the attic. Yup, charred beams and all - but still standing. Haven't yet made up my mind about whether the house is cursed or just me!

Bats ... I love them, but I wish they would go outside to do their business. Stripping the walls down to the studs and cleaning out the guano ... sealing all the holes I could find with expanding foam in the winter to keep them from returning ... only to notice them flying out of a new hole this July.

Well, time to climb the roof and try to find their new entryway.

Maybe the yuckiest job I ever had to do was when we were young and moving into our first condo (of course it was a major fixer, that's all we can ever afford!). The previous owners had a dog that they kept penned up on the balcony, which was covered with indoor/outdoor carpeting. Of course the dog was forced to use it as his toilet for however many years they lived there.

The first night that we moved in I was out on the balcony prying up the sloppy-soggy dog-slime carpeting up (of course they had used 10,000 gallons of glue to apply the carpet). Hauled it down the passenger elevator to the dumpster in the garage. Then washed the cement balcony three times with straight bleach.

Removing acoustic sprayed-on coating from the 10-foot ceilings in every room in my Queen Anne Victorian, then re-plastering and patching the original ceilings.

And from Deb and Ken:

One inspector refused to finish the house inspection, officially citing "health concerns," and private opining, "This is disgusting."

The pigeons nearly sank the sale of the house.

But because we love this old place, and are probably insane, we bought the house anyway -- after first getting the pigeons evicted and their nests and roosts thoroughly cleaned.

Two years later, we're still pigeon free. But local people still ask if we ever got rid of the pigeons. And we never again have watched "The Birds."