Built in 1736, the Henry Antes house sits on a 34 acre plantation now owned by the Goschenhoppen Historians, Inc.  Once every year the property is packed with visitors to the  Goschenhoppen folk festival.  The festival is a large living history presentation of early Pennsylvania German culture.

The house was designated a National Historic Landmark in 1992.  It qualified not only as a well preserved example of early 18th century German colonial house construction but it was also the home of a very important person that immigrated to the Pennsylvania colony. 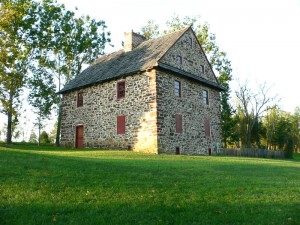 When Henry Antes came to Pennsylvania at the age of 19, he was a skilled tradesman, probably a carpenter, builder and/or millwright.  He quickly built a paper mill that he co-owned with a partner in Germantown, now a section of Philadelphia. After marrying his partners daughter and having a few children, he moved about 40 miles north into the “wilderness”, in an area where other German settlers were clearing the land and establishing large farms.  Here he purchased 175 acres in Frederick Township and then built his fine home and also a mill.

He appears to have been very involved in local worship, even offering his home for worship services.  When the Moravians were looking to establish a community in PA, they would  meet with Henry.  Impressed with this religious group, he became involved with their mission and acted as their agent in the purchase of the land that became the city of Bethlehem.  He continued in their service designing and overseeing the construction of mills and other important buildings. He left his home to move to Bethlehem and eventually became entrusted to handle business matters for the Moravians.  He gave his property over to be used as a Moravian boarding school.

Eventually he got in a dispute with the Moravian leader and returned to his estate.  By this time he had 11 children and other responsibilities in the colony, including being appointed the honorable position of Justice of the Peace for Bucks County, and then for Philadelphia County.  Eventually he again gave assistance to a the Moravians with a project in North Carolina.   He returned home from the South and at the age of 54, died at home.  His family remained in the home until after the Revolutionary War.  The home was used by General Washington as his headquarters at some point during the war.  Shortly after, the family sold the home.

Early colonial PA German homes, like the Henry Antes house, often had a very large “open hearth” fireplace in the center of the 3-room plan main floor.  The fireplace was open to the “kuche” (kitchen). Behind the fireplace wall is a “stube” (parlor room),  that would be heated by a 5-plate stove.  The cast-iron plates were often highly decorated, and might include biblical scenes or quotes.  The stove would be mounted over an opening in the back wall of the fireplace, where hot coals from the main fire could be passed.  The third room is the “kammer” or main bedroom. Other common features include small windows, usually not placed symmetrically, and very steep roofs.