Each summer I lived in Tonopah as a kid, there were two places I went just about every day. One was the pool. The other was the library. I’ve been to the library this summer, too, but my trips aren’t to check out books. They’re to help keep the library operational and to help preserve and restore the first circulating library in rural Nevada, which is also listed on the National Register of Historic Places. 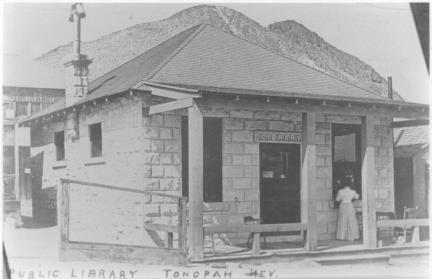 Photo, 1906, courtesy of the the Central Nevada Historical Society in Tonopah, Nevada, home of the "Best Museum in Rural Nevada, 2010"

The Tonopah Public Library was built in 1905 as the result of the town’s first death. John Randall Weeks, 47, was a geologist who died of heart failure while cutting wood in 1901. His funeral was the first in the mining boom town of Tonopah. His brother George Weeks, an editor from Colorado, suggested when visiting that the town form a library. After returning home, George sent 100 volumes of classics and best sellers.

Though there is some disagreement as to if those first books ever made it from the temporary library tent into the finished library, a beautiful library was completed and was dedicated in 1906. A Feb. 23 article in the Tonopah Daily stated, “The building is one which does credit to Tonopah. It is substantial, it is beautiful.” Three “public-spirited women,” as the newspaper called them, were responsible for the erection of the building. 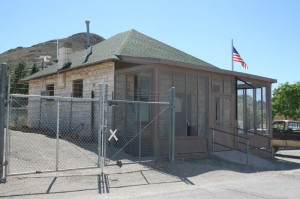 The historic Tonopah Library Building as it stands today.

The single story building is slightly more than 1000 square feet and is “coursed dressed stone” on the facade with “random ashlar construction” on the sides and rear, according to the historical building report from the county. The cream-colored, chalky stones are the same as those used in many other early 1900s buildings in the area and taken from a nearby quarry. It is the best preserved example of early stone construction in town and was used as the public library until 2000.

Very few modifications have been made. The same historical report noted that the building was unmodified except for the screens added to the porch. That’s not exactly true as the building didn’t have a restroom until the 1970s. Up until that point, the only facility had been an outhouse out back. An oral history taken from a librarian who worked there in the 1970s recalled a patron who took a pork chop out of his satchel one day intended to cook lunch in the library on the blacktop stove. The old stove was changed out for a rather unattractive wall-mounted gas heater–instead of having the original stove converted to preserve the historical integrity.

"Library" carved into the lintel.

How did those three women raise enough money to build the library in the first place?  They held socials and lectures and solicited local businesses and families. One lecture on “The Social Side of Rome in the First Century” resulted in $15 in donations. These women were able to get the block donated, the lot donated, and raised $10,000–the equivalent of $235,723 today. One even slept on the building site and supervised the laying of each block. A few years later when the money ran out, they pinched and scraped within the community to keep the library open.

What is currently happening with such a treasure?  The building has been used as storage for 10 years, and though grant funds were secured at one time to do some restoration, those projects were incomplete. As budgets get cut, help gets cut, and things get lost in the shuffle. Library volunteers are currently working to clear out clutter and sell surplus books as a way to raise funds for the library, much like the library’s founding mothers.

Like many libraries throughout the nation that are cutting hours and employees due to budget cuts, Tonopah’s library is struggling. But it’s not just an old library building–it’s a part of our state and local history, too. And that should be worth a bit more pinching and scraping.