One of the incredible things about living in an old town like ours is that walking out front door is, at once, walking into the past and into the future.

Across town, just a little way down the street from the newly built homes (we need’ em), lies a dirt road. Its tucked between a stream corralled by a concrete pipe running under the street and three magesterial Gothic Revival homes. I’ve run by there plenty of times and never noticed it until my boy and I were walking, moving much slower, like the water beneath our feet. 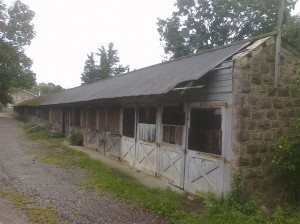 But there it was amidst all this pavement: a dirt road bending around and going…somewhere.

I’ve never met a dirt road I didn’t like and Jack and I were obligated to explore the unknown.

Rounding the bend, we saw this row of horse carriage stalls. It was like emerging from a time machine. Upon closer inspection, it’s plain to see they’re all padlocked, boarded, and practically forgotten. But there they stand. Simultaneously a junkyard and a portal to a different time and way. They are in original condition save the shattered glass has been skinned with 1/2 inch plywood. The livery replaced with…stuff. And the history they tell, plain to see as the locks on the doors and empty road.

Stone walls carry the Douglas Fir roof purlins. The roof itself that once covered a platoon of horses is corrugated asbestos panels made just a few hundred yards away and a century ago. The doors–all of them–appear to be both operable and in good condition which I attribute to the implicit elegance in smart design. 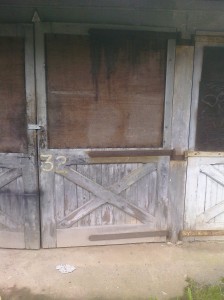 The X-braced tongue and groove panels are protected by a substantial overhang. Sure, they get wet and piled with snow, but they also get to dry out–the secret to wood’s longevity. There aren’t many modern garages I see standing this test of time. It’s a triumph.

See, despite their pedigree, this row does what it’s always done: store stuff. I think it’s cool they were built to store horses, the motor that moved society back then. And think it’s kind of tragic that they’re packed with rusting bikes and plastic crap from a consumer society that sits on its collective butt piling worthless new stuff on top of even more worthless old stuff like the Great American Landfill.

And yet, the buildings stand, open for the world to see like a life sized pop-up book. but their elegance is lost on the un-trained and torpid eyes of their owners or renters who put their hands on a century-old door handle and care more about housing the lawn-chair and cooler until next summer’s trip to the shore. No one cares for these buildings. Just the stuff in ‘em. They won’t last forever. The first chink in the armor has already begun.

Yes, they’re just garages. But in having stood guard for a century they are so much more than that. A lesson. An achievement. A walk into the past and into the future.