A Historic Address That Comes with Security Detail

Chicago is an old city that boasts many wonderful historic neighborhoods, including Hyde Park, home to the University of Chicago, the Museum of Science and Industry … and President Barack Obama. This week, a stately home neighboring the Obama family residence at 5040 South Greenwood Ave., went up for sale; although a price is not listed, real estate pros estimate the price tag between $1 million and $2.5 million. 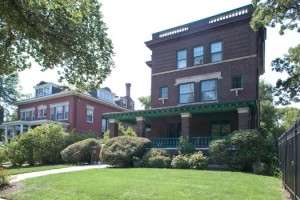 The 6,000-square-foot home was built in 1906 by A.R. Clark — who also owned the Obama house (and perhaps at the time was somebody, but today elicits no hits when Googled). The Realtor’s website says the 103-year-old house was used during World War II to house officers. Later it was used as a boarding house for a small military school.

Whoever buys the three-story, 17-room Georgian manse will be subject to Secret Service screening, according to story in the New York Times. The current owners are empty nesters in their 70s, a professor of political science at the Illinois Institute of Technology and a transit expert and Democratic political activist, who are friendly with the First Family.

They even allowed Obama to film a campaign commercial in their living room, and they also have a dog — a boxer named Roxy — who may have helped spur the Obama girls’ campaign for their now-famous Portuguese water dog, Bo.

Whether the home garners an inflated price due to its famous neighbors is yet to be known. But the owners admit the home is a fixer-upper, according to the New York Times piece. It has its original turn-of-the-century electrical switches; the bathrooms and kitchen are dated and the third floor has long been neglected. However, the home is a bit of a gem in that it has all its original fixtures, woodwork, ornate plaster work and stained glass windows.

It does come with another cost, too: the inconvenience of living next door to the President. There’s increased traffic and Secret Service surveillance, among other hassles.

“There are some people who would never live under these circumstances,” homeowner Bill Grimshaw told the Times. “I’m just hoping for a good patriot, a good family man, a good Democrat.”