A Rant About Digital Picture Frames (and a few other things)

The Environmental Protection Agency recently issued new Energy Star guidelines for digital picture frames, computer monitors, and other displays.  If all digital frames and displays meet the Energy Star standards (which is unlikely), this will eventually lead to $1 billion in annual savings, and prevent greenhouse gas emissions equal to those produced by 1.5 million vehicles. The savings from more energy  efficient digital picture frames, according to the EPA, would account for about 10 percent of this energy and emissions savings. The EPA also notes that more than 9 million digital picture frames shipped in 2008, and this number could approach or even surpass 20 million by 2015. Finally, the EPA says these new standards achieve this energy savings by making Energy Star displays 20 percent more energy efficient than current models. 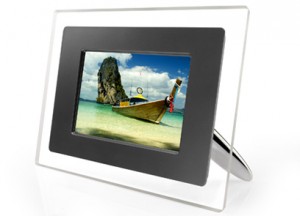 "Hey, look at our ecotourism pictures!!!"

The EPA press release caught my attention because I’d recently heard someone on NPR’s All Things Considered talking about the environmental costs of digital picture frames, which theoretically (very theoretically) could eventually use energy equivalent to the output of five new power plants. I don’t know offhand the typical output of a new power plant, but I’m certainly capable of looking a little more deeply into the EPA numbers. By making digital frames 20 percent more efficient, the energy savings from the Energy Star frames is 10 percent of $1billion, or $100 million a year, and the emissions savings is equal to that produced by 150,000 cars. That’s the energy and exhaust saved. If that represents a 20 percent improvement in efficiency, then the energy used by these things would be four times that amount, or $400 million, with emissions equal to that produced by 600,000 cars. This doesn’t even take into account the energy wasted when computer monitors are turned into de facto digital picture frames with screen saver programs that run an endless slide show of your digital images.  That’s a lot of juice, and a lot of pollution, and for what?

I’m not anti-tech, but I am anti-waste, and these things just seem like a gimmick-run-amok to me. I do like to look at my close friends’ and family’s vacation or party pictures. Once. Maybe. But isn’t it more powerful to pick one or two or three images that really capture the experience and display them in real frames, as opposed to having all the images–the great ones, and the mediocre ones–in constant rotation? Aren’t great pictures worth taking a long look at?

And is there a point to having the constant slide show playing to an empty room? Some newer models at least will dim or shut off when lights go off. Others are activated by motion sensors, and some can be programmed to turn on and off at certain times. These improvements make digital frames more palatable, and should be mandated, but I still don’t get the notion of using so much electricity for something that, to my mind and eye, is inferior to the non-energy consuming pictures and frames that are being replaced.