A restoration fit for Hollywood royalty 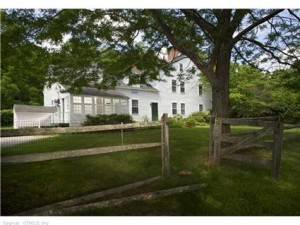 Among all of the celebrity homes that have hit the market lately, few stand out as a historic gem. This one in Connecticut, however, is definitely worth a look. “The Cotton Tavern” sits on 40 acres of what is commonly referred to as the “Quiet Corner” of Connecticut, where the population is surprisingly low. The Federal-style house was built around 1770, and has been added onto over time whenever the residing family needed more space. Owner Renee Zellweger recently put the house on the market for $1.5 million.

The list of renovations done on this house are impressive. There are the usual things you would expect, such as an extensive overhaul of the plumbing and electrical systems, as well as the addition of a heating and air conditioning system. The kitchen was completely rebuilt, but it was done with care–the custom kitchen cabinets were built to reflect the time period in which the original house was built, and the hardwood floors were carefully chosen to match the rest of the house. Crown molding and new baseboards were installed, but they mimic the “real thing.” 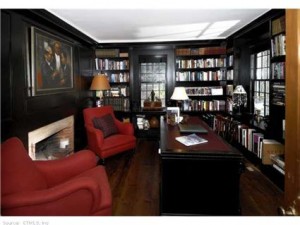 Some important elements were kept in place or restored in such a way that the original integrity of the house wasn’t compromised. The rear staircase was rebuilt, probably for safety concerns, but it was designed to look just like the original. Most of the original hardwood floors were kept, and so were many of the bathroom fixtures, including the tubs and sinks. Rather than strip the paneling from the majestic library, it was painstakingly restored.

In keeping with the look of the original home, the siding is painted wood clapboard, and the replacement windows blend in well with those that have been there for over a century. The fireplaces? There are seven of them, and they are all original.

The guest cottage is the original carriage house, and it still has the original doors. It also has an abundance of rough-hewn ceiling beams, wide-plank hardwood floors and replacement windows that are customized to look like the originals on the main house.

All of this is tucked away behind dry stone walls that are five feet high and four feet thick. That’s a nice historical touch that also provides some serious security. 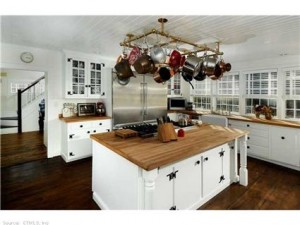 A refreshing new life for an old house

Many celebrities with virtually unlimited funds tend to cast aside older homes in exchange for something new. After all, new construction is often much easier than careful restoration, so it’s nice to see someone pouring their cash into keeping up the integrity of their historic home.

The new owners of this place could consider putting in energy-efficient improvements when it is time to do a bit more renovation work. As any old house lover will tell you, the renovation on a home built in the 1700’s never actually ends. In a few years, we might see this home touted in Architectural Digest, and it could well have more improvements that make this historic home more than a little green.