A unique way to rescue an old house

Every few weeks there will be a nice write-up, complete with video, of an old house lifted onto a platform and rolled through the streets to a new property. Just as common are the heart-warming stories of historic homes saved from the wrecking ball by a group of concerned citizens and a few hefty donations. 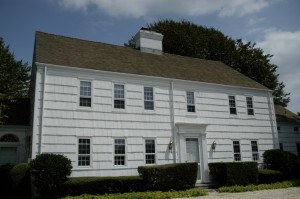 The lovely house that will move back to Sag Harbor. Image credit: Robert Strada and Sag Harbor Express.

But it isn’t every day that you hear of a historic home that was literally taken apart, piece by piece, in order to save it. That’s what happened with a 1740’s home in Southampton, New York.

A labor of love

Robert Strada and his wife Michelle learned in 2006 that the home was to be demolished. Unfortunately, there was nothing the historic commission could do, as the home was just outside of the designated historic district. Ironically, “outside of the district” meant literally right across the street.

After a bit of legal wrangling, Strada secured permission to remove the home, one stick at a time. It took a month to dismantle the house, and then it was stacked neatly in a warehouse in the hopes of one day finding a new home. After several years of looking for the perfect place, Strada and his wife took out an ad in The Sag Harbor Express explaining the situation. Two friends they had known for decades stepped up with the offer of property, and the rest, as they say, is history.

But this isn’t the first time the house has been moved. It was originally constructed in Connecticut and then moved to Sag Harbor, where it remained for many years. At some point a woman from Texas fell in love with the home, and her devoted husband agreed to move it to Southampton for her. The move was made much the same way the current one was–painstakingly, piece by piece.

The art of taking a house apart

Taking houses apart to move them happens more often than you might think. It is not unusual to see ads in newspapers or online for homes given away for free, assuming they can be moved by the new owners. A good contractor and their team can make short work of a small house, but for homeowners intent on doing the job themselves, the work could take months.

Long before modern conveniences made lifting a house look easy, homeowners were taking apart a house one piece at a time, starting with the siding and ending with the plumbing and other major internal systems of the house. It was all slowly shipped to its new home and assembled with painstaking care. Other methods included rolling houses, or large sections of them, on a series of logs stacked side by side. Sleds pulled by strong horses or oxen were sometimes used to carry parts of the houses just as they had once carried parts of the trees that made them. Timber carriers allow large logs and stacks of lumber to be moved by hand with relative ease.

Keep in mind that taking apart a house, even if you are doing most of the work yourself, is not a cheap proposition. In many cases a contractor must be employed to help put the house back together, and some areas of the house might need to be upgraded after years of neglect, making that kitchen remodel or new bathroom an absolute must. Though obtaining a historical home for a few thousand dollars might be tempting, it pays to consider the additional cost, time and effort that must be poured into the home to make it livable again on another piece of property.