Adaptive Reuse is the Ultimate "Green"

By: Bill Kibbel , Contributing Writer
In: Green Renovations, In The News
1
Comments

I’ve had the pleasure of inspecting several dozen mills that were built in the 18th and 19th century.  Some were going to be converted to residential or commercial space, two were going to be preserved for interpretation, but most were already converted to a new use.  These were all water powered mills, with a majority having the primary function of grinding grain into flour.  It’s fascinating for me to be able to see these buildings that were built for the earliest industrial enterprise of each community.   The reason most of these remaining mill buildings have survived after new technology rendered them idle – adaptive reuse.

One of the grist mills, converted into a residence, had adapted the water power mechanism to run an electrical generator.  The previous owner claimed that it continually supplied the home’s power needs.  There’s even surplus electricity that’s sold to the local utility.  This was done long before the word green meant something other than a color.

Earlier this week, a colleague sent me a brochure describing a recently renovated historic mill building in Augusta, GA.  The Granite Mill, built in 1848, now contains 15,000 square feet of office and residential units.  It is located in a 19th century industrial complex called Enterprise Mills, that used water power from the Augusta Canal.  The complex is provided electrical power from two 1890 hydro turbines, capable of producing over six million kwh of electricity per year.  The complex only uses four, so the surplus is sold to the Georgia Power grid. 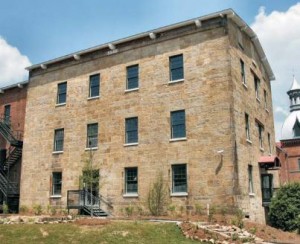 In addition to the green practice of adaptive reuse, the renovation of the building made use of salvaged and local materials.  The exterior walkways and sitting area was built with granite leftover from the remodeling. Scraps of drywall were composted for use in the landscaping.   At least half of the new materials were manufactured within 500 miles, reducing fuel use.

Some of the other “green” features include a solar collector on the roof that generates the hot water, low-flow plumbing fixtures that will save about 100,000 gallons each year and Energy Star rated appliances.  The Granite Mill certainly deserves the designation of a LEED Gold Status for green building practices.