As you’ve probably been able to glean from previous posts, there are many characteristics of old houses that I feel set them apart from new homes. In my opinion, the intricate workmanship and architectural details on display in many old houses is vastly superior to that found in most of the structures built today.   However, if I had to name one trait above all others that draws me to old houses, it would have to be their character.

How do I define character? That’s a tough question to answer as for me character is felt rather than seen. When I walk in the front door of a home, the walls and flooring either emit character or they’re just some framing with a few finish materials added for an attractive appearance. Perhaps all it takes is a few decades of memories being made within its rooms to give a home character and if they last long enough, even houses built today may eventually have the trait. 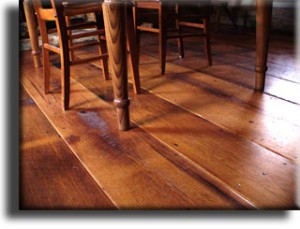 Is it possible to add character to a home — can decades of memories suddenly become a part of a house in a matter of days? I suppose it depends on who you ask, but my answer would be that it can be done with a generous infusion of reclaimed wood. Whether salvaged from old barns, houses, or factories, reclaimed wood has decades and sometimes centuries of memories already etched into its beautiful grains and even visible on its surface at times.

The material can be used for flooring, interior trim, kitchen cabinets, or pretty much anywhere in a home that you might consider using wood. And if you’re concerned about protecting the environment, using reclaimed wood is the ultimate in recycling. You’re reusing material from trees that were cut down ages ago and saving it from ending up in the burn pile.

There’s a reclaimed wood for just about any application 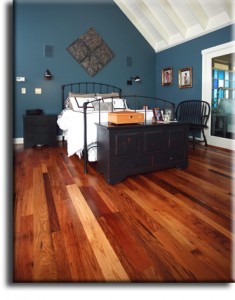 Finding a vendor for reclaimed wood is easier than you might think. Once limited to a few specialty companies, the increased emphasis on using green building materials for remodeling and new construction has brought many new wood salvage vendors into the field. If the material isn’t available locally, many companies are more than happy to ship.

Reclaimed wood is available in many species including a few that are rarely found in today’s forests and can be milled to meet your needs. Whether you’re looking for an elegant dining room floor or rustic trim for a weekend retreat, there’s a reclaimed wood that’s right for your application. If you want wood that practically oozes character, choose reclaimed material that still displays the nail holes from its previous incarnation.

Reclaimed wood just might be able to add that missing character to your home and may become a foundation upon which your family can create its own memories.