Their House is a Museum When People Come to See ‘em

The best part of the mid 1960s sitcom for me was the Addams’ family home. The exterior of the house flashed several times throughout each episode. The interior was quite interesting too. If you ignore the 10 foot tall stuffed polar bear in the foyer, the moose head with one sagging antler over the fireplace and the suits of armor in the parlour, the architectural details were spot on for the period of the home. Okay, I realize now that was a TV show set and not the real interior of the house, but as a kid, I thought it was awesome. I wonder if a good therapist could trace the roots of my interest in historic buildings back to watching the Addams Family.

The show was based on a group of characters (I see the house as one of the characters) created by Charles Addams for a cartoon that regularly appeared in The New Yorker magazine. The Addams house portrayed in the cartoon is said to be inspired by two houses from Charles’ childhood in Westfield, NJ. One was a home he lived in and the other was one he broke into and was apprehended by the police. Another claim is that a house at the University of Pennsylvania, where Charles attended, was the inspiration. A fine-arts building at the campus was named for him. 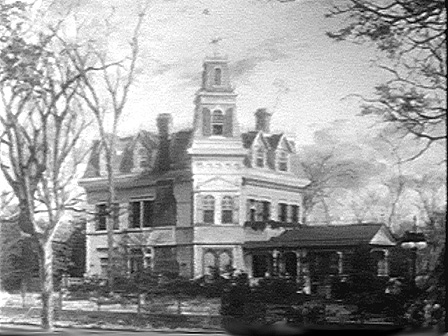 The first episode of the TV series used footage of the exterior of a house in Los Angeles, rumored to be on Adams Boulevard, but has been demolished. The house that appears throughout all subsequent episodes is a matte painting on a photo of the original house, commissioned from artist Louis McManus. The painting extended the tower, added the gabled dormers, the weathervane, bare trees and the bent TV antennae. The house in the title card at the very beginning of each episode, is a simple drawing of the house by McManus.

The style of the home is Second Empire and the changes made with the matte painting were quite appropriate. This style, common between 1860-1885, usually has features that include mansard roofs with dormers, central square bays or towers at the main entrances, pedimented, paired and arch-topped windows.

I can’t understand why many folks, when seeing a dilapidated or neglected Victorian era home, label it an “Addams Family” house. In this inspectors view, The Addams’ house was rather well maintained and resplendent, considering Gomez, Uncle Fester and Pugsley were always shooting things off or blowing things up.